The EU and the ICC 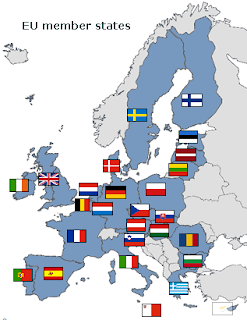 (Delighted to welcome back guest/alumna Carmen Márquez Carrasco, currently a Visiting Professor at Columbia University's Institute for the Study of Human Rights, who contributes this post, another in IntLawGrrls' series of posts in connection with the just-concluded Kampala Conference)

The International Criminal Court Review Conference has constituted a significant milestone for the ICC, not only because of the adoption of the first amendments to the Rome Statute on Article 8 and on the definition of the crime of aggression and the jurisdictional filters (text detailed in post below), but, as posted by IntLawGrrl Valerie Oosterveld, because of the relevance of certain stocktaking discussions for the future work of the ICC.
Indeed, the Conference provided a unique opportunity for states and international organizations such as the European Union to reflect on the achievements of the Court and to reaffirm their commitments to combat impunity for the most serious atrocities.
The European Union and its 27 member states (above right) (map credit) count themselves among the most ardent supporters of the Rome System. (Overviews of the instruments and measures adopted, within the framework of the EU's Common Foreign and Security Policy, are here and here.)
In particular, the European Parliament for years has been committed to enhancing the development of international criminal justice, and has been closely following and supporting the activities of the ICC. Additionally, the Parliament has adopted various resolutions on ICC-related

issues. Activities in this regard have been promoted by the Parliament Subcommittee on Human Rights, now under the very active Chair, Heidi Hautala (left) of Finland. (photo credit)
In its Annual Report on Human Rights in the World in 2008, the Parliament launched important appeals in relation to the ICC. It called on all EU Presidencies to raise the importance of cooperation with the ICC in all EU summits and dialogues with third countries, and on the European Council and the European Commission to continue their vigorous efforts to promote universal ratification of the Rome Statute and national implementing legislation.
A number of initiatives marked EU preparation for the Review Conference, which ran from 31 May to 11 June.
On 23 March, ICC Prosecutor Luis Moreno-Ocampo addressed a joint hearing of the EU's Foreign Affairs Committee, the Development Committee, and the Subcommittee on Human Rights. An additional exchange of views took place in the Subcommittee with the ICC President, Judge Sang-Hyun Song, on 27 April. And on 19 May seminar, “The EU and the ICC: Beyond the Review Conference”, was held in Brussels, Belgium, organized by the Spanish Presidency of the EU and the Coalition for the ICC, with the cooperation of General Secretariat of the Council of the EU and the EU Commission.
Support for the universality and integrity of the Statute, as well as for the stocktaking exercise, also was expressed through a relevant Resolution of the European Parliament adopted on 19 May. In the same line, EU Council Conclusions on the Review Conference followed on the 25 May.

In accordance with the above-referred legal and institutional framework, during the general debate at the Kampala Conference the EU Spanish Presidency (logo at right) and member states announced tangible commitments to the Rome Statute by making EU pledges to the ICC, around four issues:
► Promoting the universality and preserving the integrity of the Rome Statute;
► Fighting against impunity as a core value to share with EU partners when entering into agreements with third parties;
► Providing financial support to the ICC, civil society, and third-country partners; and
► Updating and reviewing of the EU instruments in support of the ICC after the meeting in Kampala, where appropriate.
Universality and implementation of the Rome Statute play an indispensable role in that regard. Both have been reviewed within the framework of the stocktaking exercise, with a significant contribution from the EU and EU countries. Among several measures, this contribution included the announcement during the Kampala conference of a substantial financial contribution to the Trust Fund for Victims.
Also, the first amendment of the Rome Statute, adopted on 9 June, was sponsored by an EU member State, Belgium, and co-sponsored by many other member states. It further enjoyed the strong support of the European Parliament. By dint of the Belgian proposal, the amended Article 8 of the Rome Statute brings under the jurisdiction of the Court the war crime of employing certain poisonous weapons and expanding bullets, asphyxiating or poisonous gases, and all analogous liquids, materials and devices, when committed in armed conflicts not of an international character.
The Review Conference was an occasion for the EU to demonstrate both a flexible approach to the issues under discussion and the necessary unity to forge consensus (encouraged by the Council and the European Parliament) on the crucial topic of the definition of the crime of aggression and the conditions for the exercise of jurisdiction over that crime. The approach succeeded despite the difficulties involved in the position of France and Britain as permanent members of the U.N. Security Council. In addition, important understandings were made possible with the United States so as to avoid detrimental results for both the EU and the Obama Administration, as discussed here by Bill Marmon, managing editor of European Affairs.
The outcome of the ICC Review Conference is an international success, and this is to Europe’s credit. In general terms, the EU attained its goals (with the possible exception of the failure to delete Article 124 of the Rome Statute, a deletion that had been pursued by the European Parliament).
Pragmatism, accompanied by a spirit of constructive compromise, is not a bad thing after all.
by Carmen Márquez Carrasco at 4:04 AM