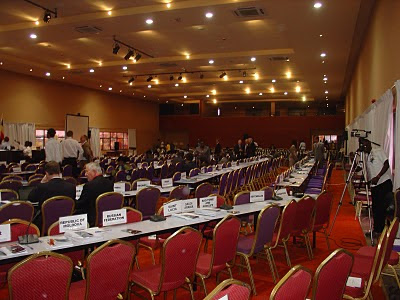 KAMPALA, Uganda – The Review Conference of the Rome Statute of the International Criminal Court ends today, and it is not clear whether there will be agreement on the crime of aggression. Specifically, it is unclear whether consensus can be found on the exercise of jurisdiction by the ICC over the crime of aggression.
Yesterday morning, Ambassador Christian Wenaweser (below left) (photo credit), the President of the Assembly of States Parties and Liechtenstein's Permanent Representative to the United Nations, released a non-paper with proposed language and footnotes suggesting additional or alternative

ideas. The non-paper incorporated certain aspects of the Argentina, Brazil and Switzerland (ABS) and Canadian proposals, but did not replicate the outcome of the joint ABS-Canada discussions of the day before. All day yesterday, intense bilateral and multilateral negotiations and consultations took place in conference rooms, restaurants, the hotel lobby and corridors. In the evening, the President convened another plenary, with bilateral and group discussions continuing into the night.
One interesting issue that has arisen is whether there will be enough States Parties present in the event that a vote is called today on the aggression provisions.
The June 9th report of the Credentials Committee notes that credentials had been received in the form required from 72 States Parties. The President indicated that another one set of credentials – from Latvia – was received yesterday, making 73. An additional 12 States had submitted “information concerning the appointment of representatives”. This brings the number of States Parties present to 85.
While, normally, the report of the Credentials Committee is largely a non-issue at a diplomatic conference, this one is being read with some interest. The Rules of Procedure of the Review Conference require that, if consensus cannot be reached, then amendments to the Statute must be adopted by a 2/3 majority of States Parties. There are currently 111 States Parties, which means that 74 votes are required for the adoption of the aggression provisions. Earlier in the week, Burundi, Central African Republic, Comoros and Djibouti - states in arrears – were granted an exemption from lost voting rights. The President also indicated that Gabon, Guinea, Marshall Islands and Nauru may also ask for similar exemptions from lost voting rights, but it is not clear at the time of writing if they had in fact done so.
Assuming an agreement can be reached on the crime of aggression that enjoys relatively widespread support, even a few negative votes, combined with lost votes due to arrears and absences due to state representatives leaving to catch flights, could result in a failure to reach the required 2/3 majority of States Parties.

This is one of the reasons why the Chair of the Working Group on the Crime of Aggression, Prince Zeid Ra'ad Zeid al-Hussein of Jordan (right) (photo credit), has appealed to states to ensure that they have representation for the entirety of the plenary meetings, which might run into the evening.
IntLawGrrls will keep you posted on the outcome of today’s negotiations!
by Valerie Oosterveld at 12:02 AM

Also well worth reading for details on happenings at Kampala, the ICC Review Conference blog by our colleague William A. Schabas, at http://iccreviewconference.blogspot.com/.