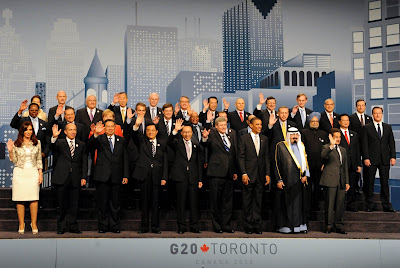 This year's official photo from the G-20 summit, held this past weekend in Toronto, Canada, looks pretty much like last year's from London, England: there's German Chancellor Angela Merkel in orange, Argentinian President Cristina Fernández de Kirchner in white, and standing 2 rows behind her, Gloria Macapagal-Arroyo, till tomorrow the President of the Philippines. Et alia. Another G-20 country now also has a woman leader, but Julia Gillard, Prime Minister only since Friday, sent Australia's Treasurer, Wayne Swan (top middle).
by Diane Marie Amann at 4:10 AM

Gender equality contributes to human development, and is also a part of the Millenium Development Goals.. Issues like POVERTY and women empowerment also act like a barrier for Asia’s development… We need to “Stand Up and Take Action”.

Globally more than 173 Million people stood up against poverty in 2009, a Guinness World Record!

Be the voice for the millions of poor people living across India.

It is Time for You to STAND UP AGAINST POVERTY NOW!

Join us on Facebook at www.facebook.com/unmcampaignINDIA and check out the photo album section for the event pictures.