It's IntLawGrrls' great pleasure to welcome Dr. Fionnuala Ní Aoláin (left) as today's guest blogger.
Fionnuala holds the Dorsey & Whitney Chair in Law and is Associate Dean for Planning and Research at the University of Minnesota Law School, Minneapolis. She's also Professor of Law at the University of Ulster and cofounder and Director of the university's Transitional Justice Institute, with offices in Belfast and Derry, respectively the largest and 2d-largest cities in Northern Ireland.
In her guest post below, she discusses the release last week of the Bloody Sunday Inquiry report on the 1972 paratrooper killings of civilians in Derry, placing the event in the context of transitional justice discourse.
Fionnuala's previously been a Visiting Scholar at Harvard Law School, Associate-in-Law at Columbia Law School, Visiting Professor at Columbia University's School of International and Public Affairs, Associate Professor of Law at the Hebrew University in Jerusalem, and a Law & Public Affairs Fellow at Princeton University. She received her LL.B. and Ph.D. from the Law Faculty at Queen's University in Belfast, and also holds an LL.M. degree from Columbia.
As is evident from her list of publications (SSRN here), Fionnuala's an internationally published expert and scholar in the areas of human rights, gender, and other issues related to transitional justice, on feminist legal theory, and on states of emergency. Law in Times of Crisis (2006), which she co-authored with Minnesota Law Professor Oren Gross, received a 2007 Certificate of Merit from the American Society of International Law, the organization for which she just began a 3-year term as a member of the ASIL Executive Council. She's at work now on a book on gender, masculinities, and transitional justice, co-authored with IntLawGrrls Dina Francesca Haynes and Naomi Cahn.
Fionnuala's many awards include a Fulbright scholarship, the Alon Prize, the Robert Schumann Scholarship, a European Commission award, and the Lawlor fellowship.
The Irish government twice has nominated her to the European Court of Human Rights. Fionnuala served as a member of the Irish Human Rights Commission by appointment of the Minister of Justice, from 2000 to 2005. She remains an elected member of the Executive Committee for the Belfast-based Committee on the Administration of Justice, and is also a member of the Irish Council for Civil Liberties.
She's just been invited to serve on the U.N. Roster of Experts for the Crisis Communications Unit, having already taken part: in a 2008 Expert Seminar organized by the Working Group "Protecting human rights while countering terrorism" of the United Nations Counter-Terrorism Implementation Task Force; in 2003 as U.N. Special Expert on promoting gender equality in times of conflict and peace-making; and from 1996 to 1997 as a representative of the Prosecutor at the International Criminal Tribunal for the Former Yugoslavia at domestic war crimes trials in Bosnia.
Fionnuala dedicates her post to the woman who was IntLawGrrls' 1st transnational foremother, whose anglicized name is Grace O'Malley (a favorite not only of yours truly, but also of IntLawGrrls guest/alumna Gráinne de Búrca). (credit for photo of statue of O'Malley on grounds of Westport House, County Mayo, Ireland) Referring to Grace by her Irish name, Fionnuala writes that 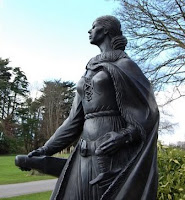 Gráinne Ní Mháille (c. 1530 – c. 1603), also known as Granuaile, was an important figure in Irish folklore and a historical figure in 16th century Irish History. While primarily viewed as a romantic and complex female pirate figure she represents for me a figure of feminist agency in a highly patriarchial society with much vigor and uniqueness in her tapestry of her life's story and choices.