IntLawGrrls is a frequent site for discussions about gender, women

judges, and international justice. It was a theme in our recent Kampala series, of course, and the central consideration in posts by guests like Patricia M. Wald (here) and Nienke Grossman (here).
In that light, this bears note:

As is evident from the photo array available here, Andrésia Vaz of Senegal (right) is currently the lone woman out of 16 permanent judges at the International Criminal Tribunal for the former Yugoslavia (logo above left).
Even that's better than the status quo elsewhere at The Hague.
As we've posted, the International Court of Justice (logo above middle) is a male-only bench, as it has been from its inception save the years that Rosalyn Higgins, now retired, served. In a recent ASIL Insight, our colleague Natalya Scimeca laid out the process by which the 2 ICJ vacancies are to be filled. In so doing, she noted that China's 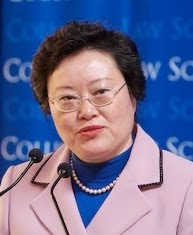 national group "has apparently nominated Madam Xue Hanqin [left], who is currently the Chinese Ambassador to the Association of Southeast Asian Nations (ASEAN) and a member of the International Law Commission," to replace the departing ICJ judge from China. No word yet on the nomination by the U.S. national group. Scimeca, who clerked for Judge Thomas Buergenthal, retiring after a decade on the ICJ, made this comment about the possibility that no woman might be chosen for either ICJ vacancy:

This would be unfortunate at a time when the Court's supporters seek to justify its continuing relevance and its unique status within the international legal realm.

(See news update in post above)
by Diane Marie Amann at 6:56 AM