(As part of IntLawGrrls' series on the ICC Kampala Conference, delighted to feature another guest post from Leila Nadya Sadat)

KAMPALA, Uganda – As the Review Conference of the Rome Statute of the International Criminal Court enters its final climactic days, it is useful perhaps to think about what has been accomplished and what lies ahead.
Certainly, States and civil society have had a real opportunity to engage the Court, and the Court’s personnel have had the opportunity to hear both praise and criticism from affected communities. The Ugandan newspapers have carried daily coverage of the conference and there is a real sense of pride among Africans here that the world came to their continent for this important milestone in the ICC’s existence. 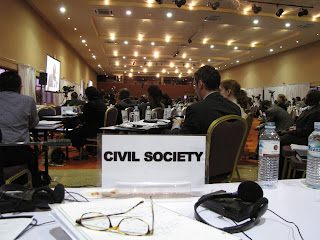 As for the amendments, last week the Belgian amendment was adopted and sent to the plenary, as this writer predicted; and while many States objected to the retention of Article 124 of the Rome Statute, others, led by Japan, argued that it was an important concession to increase ratifications, particularly in Asia, and it now appears that it will be retained with a “sunset” provision (at the fourteenth Assembly of States Parties meeting).
But of course, it is inclusion (or not) of the crime of aggression that is the critical issue and the most difficult. The statements of delegates during the opening plenary and opening sessions of the Special Working Group on Aggression demonstrated tremendous consensus on the inclusion of this crime within the Court’s jurisdiction; but divergences of views emerged as to the preconditions for the exercise of the Court’s jurisdiction. In contrast to U.S. Ambassador at large for War Crimes Issues Stephen Rapp’s very well-received remarks in the opening plenary, U.S. Department of State Legal Adviser Harold Hongju Koh delivered remarks on Friday, June 4th that were more difficult for many delegations to swallow. Koh emphasized what he thought was a lack of consensus among the delegates and imperfections in the definition of aggression set out in proposed Article 8bis. Perceptions that the U.S. delegation was present to “kill” the inclusion of aggression caused much discomfiture in the room, even though the other permanent members of the U.N. Security Council also spoke out in favor of an exclusive role of the Council in determining whether or not an act of aggression had taken place or not, including Britain and France. The latter referred to this as a “ligne rouge” that could not be crossed.
As I wrote a decade ago about the Rome Statute itself, the issue of the crime of aggression poses a clear challenge to the prerogatives of the P-5, and at the same time is linked to them through the possibility of Security Council referral (Article 13(b)) and Security Council deferral (Article 16 ). Many States and several human rights groups believe that granting the Security Council an exclusive filter will politicize the Court and oppose inclusion of aggression subject to that precondition.
H.R.H. Prince Zeid Ra'ad Zeid al-Hussein of Jordan, Chair of the Special Working Group, has had a difficult task during the past few days navigating between these two positions to forge a middle ground. A new conference paper has emerged as well as new “understandings” proposed to attempt to bridge the gap (including one attempting to underscore that the Court will really hear only the “most serious” cases), and there is cautious optimism among the leadership of the Review Conference as well as with this writer, that a compromise solution will be adopted.
One last thought:
As a member of civil society attending the ICC Review Conference and a proud U.S. national who, at the same time, was not part of the U.S. delegation (and respectfully begs to disagree with official U.S. policy on the issue of aggression) I was thinking about this interesting situation of so many Americans present in one capacity or another at this important meeting, even though the United States is not a party to the ICC, and in fact spent many years actively trying to destroy the Court.
In addition to the very large official delegation (14 members is what I have been told, although the initial rumor was that there were 25 members present), many influential U.S.-based human rights groups are present, several representatives of various foundations, a collection of assorted law professors attending in one capacity or another (including this correspondent), the American Coalition for the International Criminal Court (AMICC), the American Bar Association 2010 Task Force, the Heritage Foundation (one member of which tried to sneak in as a CICC member!), and, in his own category, former Nuremberg Prosecutor Benjamin Ferencz. I suppose this is all to be expected; the ICC as an institution represents values that American lawyers adhere to, and the Nuremberg legacy exerts a powerful influence even today. Yet, although I saw two Chinese representatives of civil society present, and representatives of other non-States Parties were there, no other non-State Party is represented to such a significant degree. This makes the contrast between the “official” U.S. delegation and the large “unofficial” grouping a noticeable one.