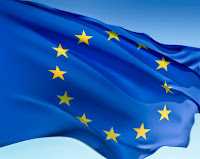 On this day in ...
... 2002, the Council of the European Union adopted the Council Framework Decision of 13 June 2002 on the European arrest warrant and the surrender procedures between Member States of the EU (flag at left). Intended to replace at-times-cumbersome extradition procedures, the warrant known as EAW "may be issued by a national issuing judicial authority if the person whose return is sought is accused of an offence for which the maximum period of the penalty is at least a year in prison, or if he or she has been sentenced to a prison term of at least four months."