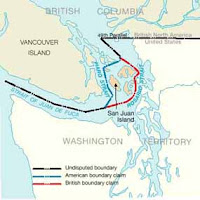 On this day in ...
... 1846, U.S. Secretary of State James Buchanan (who would become U.S. President a decade later) and British envoy Richard Pakenham concluded the Oregon Treaty, which established the U.S.-Canada boundary at the 49th parallel. Dispute ensued regarding the pact's treatment of islands off the West Coast. As a result, on this same day in 1859, the killing by an American of a British pig touched off a Pig War on San Juan Island. (map credit) Joint occupation of the island thus followed, until the United States obtained undisputed possession in 1872.