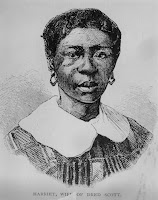 On this day in ...
... 1876, Harriet Scott (left) died in St. Louis nearly 2 decades after issuance of the U.S. Supreme Court judgment in Scott v. Sandford (1857), in which she and her co-plaintiff husband, Dred Scott, had lost their suit to avoid being returned to slavery. The Court held that no one descended from African ancestors held as slaves could be U.S. citizens; thus the Scotts were denied the privilege of litigation in U.S. courts. The

Scotts had been freed months after the decision. He worked as a hotel porter till his death from tuberculosis in 1858; she was a laundrywoman. As posted at Legal History Blog, she's the subject of a 2009 biography, Mrs. Dred Scott, by Iowa Law Professor Lea VanderVelde (right).