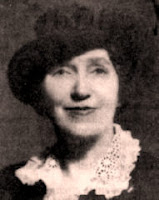 On this day in ...
... 1910 (100 years ago today), the 1st Father's Day was celebrated in Spokane, Washington. Among those credited with its establishment (prior post) is a then-28-year-old woman, Sonora Smart Dodd (left), whose father, Civil War veteran William Jackson Smart, had cared for her and her 5 younger brothers after their mother, Ellen Cheek Smart, died in 1898. The hearing in 1909 of a sermon about Mother's Day inspired Dodd's work toward the honoring of fathers as well. "In 1966, President Lyndon Johnson signed a presidential proclamation declaring the third Sunday of June as Father's Day. In 1972, President Nixon established a permanent national observance of Father's Day to be held on the 3rd Sunday of June each year." This year -- not only in the United States, but also in other countries, from Argentina to the United Kingdom -- Father's Day is tomorrow. (It's today in Bulgaria.)