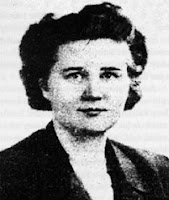 On this day in ...
... 1996, Lucile Lomen (left) died in Seattle, Washington, 75 years after her birth in Nome, Alaska. She earned her undergraduate degree with honors from Whitman College in Walla Walla, Washington. Granddaughter of an attorney, Lomen then was graduated 1st in her law class at at the University of Washington, where she was editor of the Law Review. According to this article:

She did not consider Harvard, for in 1941 the Harvard Law School did not admit women. The University of Washington Law School had admitted women from the time it opened its doors in 1899. In 1941, there were three women enrolled in the law school, including Lomen.

Employed for October Term 1944 by another Whitman alum, Justice William O. Douglas, "Miss Lomen," as she was called, was the 1st woman to serve as a law clerk on the U.S. Supreme Court. As posted, it would be 2 decades before another Justice hired a woman clerk. (photo credit; a (c) photo of her at her Court desk is here.) In 1945 Lomen returned to her home state, where she practiced as an assistant attorney general and then as an attorney for General Electric, retiring in 1983. Asked years later about her clerkship, Lomen said:

'You know, there was nothing unusual about it. I mean it was unusual that I as a woman, but I was just a lawyer, and that is all I wanted to be.'