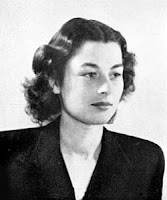 On this day in ...
... 1921, in Paris, France, a daughter was born to a French mother and English father. She would spend her childhood in England and take work at a perfume counter. At a 1940 Bastille Day parade in London, she met a French officer, whom she married, after 42 days. Her husband died in battle a couple years later, without ever seeing their daughter. Violette Szabó (left), codenamed "Louise" and "La P'tite Anglaise," then became an agent for the British Special Operations Executive (prior post), helping to organize the resistance in France. Eventually she was captured, interrogated, and tortured. Szabo was detained at the Ravensbrück camp, then, at age 23, executed, in 1945.