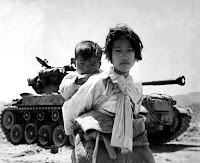 On this day in ...
... 1950 (60 years ago today), President Harry S. Truman announced that he'd ordered U.S. troops to join South Korea in enforcing the June 25 U.N. Security Council Resolution 82, which, by a vote of 9-0 with 1 abstention, called for "an immediate cessation of hostilities" on the Korean peninsula and withdrawal of North Korean armies to the 38th parallel. Later on this same day, Council would vote 7-1 in favor of Resolution 83, which

Recommends that the Members of the United Nations furnish such assistance to the Republic of Korea as may be necessary to repel the armed attack and to restore peace and security in the area.