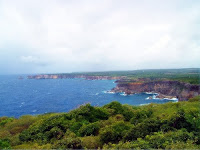 On this day in ...
... 1635 (375 years ago today), the Compagnie des Îles de l'Amérique established a French colony at Guadeloupe (right), a Caribbean archipelago about 10 times the size of Washington, D.C., where the explorer Christopher Columbus had landed in 1493. "By 1674, Guadeloupe was annexed to the Kingdom of France and a slave-based plantation was established." Britain and other countries wrestled for control of the territory, but French colonization was confirmed in the 1815 Treaty of Vienna, and slavery was abolished in 1848. Guadeloupe remains a French colony and so is a member of the European Union.