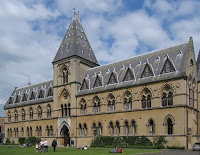 On this day in ...
... 1860 (50 years ago today), a famous debate over evolution took place at the natural history museum in Oxford, England (right). Opposing ideas set forth in the just-published The Origin of Species by Means of Natural Selection by Charles Darwin, an Anglican bishop

ended his speech by archly asking one of Darwin's biggest supporters, Thomas Huxley, if it was his grandmother or his grandfather who was descended from an ape.

If I had to choose between being descended from an ape or from a man who would use his great powers of rhetoric to crush an argument, I should prefer the former.