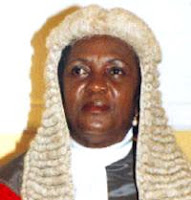 On this day in ...
... 1947, Georgina Theodora Wood (right) was born. Since June 2007 she's been the Chief Justice of Ghana, the 1st woman to hold that position, and thus also the "highest ranked female in Ghana's political history." Trained in police work as well as the law, Wood became a magistrate in 1974 and served in various judicial capacities thereafter. Other women serving among the 10 members of Ghana's highest court are Justice Sophia A.B. Akuffo, also a judge on the African Court on Human and People's Rights (prior posts here and here), and Justice Sophia O. Adinyira, also a Judge on the U.N. Appeals Tribunal.