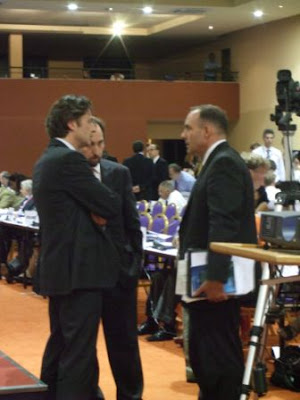 This post follows on the heels of a prior post discussing "understandings" attached to the crime of aggression at the ICC Review Conference in Kampala this month.
On June 8, 2010, Bill Leitzau, Deputy Assistant Secretary of Defense (Detainee Policy) of the United States (shown at right on the right meeting with the Chair of the Working Group on the Crime of Aggression, Prince Zeid Ra'ad Zeid al-Hussein, and the President of the Assembly of States Parties, Christian Wenaweser) informally circulated five sets of understandings addressed to different aspects of the definition of aggression and its application by the Court. In addition to the complementarity understandings already discussed, one set of understandings attempted to tether the definition of aggression and its interpretation more closely to certain aspects of General Assembly Resolution 3314 and in particular its threshold provisions. In particular, the United States proposed language (which became part of Understanding X) to the effect that

it is understood that, consistent with the principles set forth in General Assembly resolution 3314, only the most serious and dangerous forms of illegal use of force are considered to constitute aggression

it is only a war of aggression that is a crime against international peace.

As an interpretive guide, the United States proposed language (which became known as Understanding Y) stating that all three components of character, gravity, and scale must be sufficient to justify a “manifest” determination.
With a second set of understandings, the United States sought to gain acknowledgement that the U.N. Charter recognizes that certain uses of force remain lawful, notwithstanding Article 2(4) of the Charter. Accordingly, one proposed understanding read:

nothing in this resolution or the [aggression] amendments … should be interpreted or applied in any manner inconsistent with General Assembly resolution 3314, nor should they be construed as in any way enlarging or diminishing the scope of the Charter of the United Nations, including its provisions concerning cases in which the use of force is unlawful.

More pointedly, another proposed understanding stated, with reference to the Rome Statute of the ICC:

It is understood that, for purposes of the Statute, an act cannot be considered a manifest violation of the United Nations Charter absent a showing that it was undertaken without the consent of the relevant state, was not taken in self-defense, and was not within any authorization provided by the United Nations Security Council.

A third set of understandings explicitly or implicitly attempted to carve out an exception for the doctrine of humanitarian intervention. First, the United States sought recognition of the fact that

a determination whether an act of aggression has been committed requires consideration of all the circumstances of each particular case, including the purposes for which force was used and the gravity of the acts concerned or their consequences.

It is understood that, for purposes of the Statute, an act cannot be considered to be a manifest violation of the United Nations Charter unless it would be objectively evident to any State conducting itself in the matter in accordance with normal practice and in good faith, and thus an act undertaken in connection with an effort to prevent the commission of any of the crimes contained in Articles 6 [genocide], 7 [crimes against humanity] or 8 [war crimes] of the Statute would not constitute an act of aggression.

In an informal Working Group session, minor changes were proposed and made to Understanding Y. The other proposed understandings proved to be more controversial. The Chair of the Working Group, Claus Kress, did not put forward for discussion the understandings mentioning either the Charter or humanitarian intervention.
There was a scuffle about Understanding X, and it was revised to mirror more closely the threshold language from Resolution 3314. In addition, the language that would have mandated a consideration of the "purposes" for which force was used generated significant discussion. A few states led by Iran argued that the introduction of the subjective element of “purpose” threatened to compromise the entire process and amend the U.N. Charter by the back door. Detractors questioned what other purposes besides self-defense were lawful under the Charter. The United States ultimately acceded to the removal of the term “purposes.” At the close of the meeting, however, the United States reserved the right to re-open the question of a more explicit mention of humanitarian intervention.
Professor Kress forwarded the new language of Understanding Y to the Chair of the Working Group. It appeared in a Conference Room Paper as follows:

It is understood that in establishing whether an act of aggression constitutes a manifest violation of the Charter of the United Nations, the three components of character, gravity and scale must be sufficient to justify a “manifest” determination. No one component can be significant enough to satisfy the manifest standard by itself.

Professor Kress reserved Understanding X for further negotiation. The next day, Professor Kress announced by way of an email via the Assembly of States Parties that Iran and the United States (ironically both Non-State Parties that have butted heads over aggression charges, most recently before the International Court of Justice in the Oil Platforms Case) had accepted a final text. This was embodied in a new Conference Room Paper as follows:

It is understood that aggression is the most serious and dangerous form of the illegal use of force; and that a determination whether an act of aggression has been committed requires consideration of all the circumstances of each particular case, including the gravity of the acts concerned and their consequences, in accordance with the Charter of the United Nations. 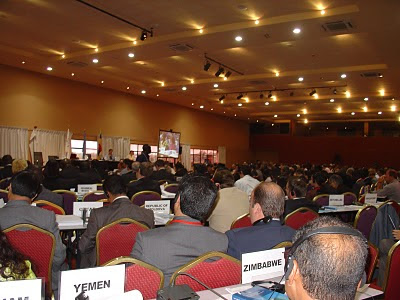 The United States never did raise the issue if humanitarian intervention again in any formal setting (photo above is the plenary room from the perspective of the United States' chair), so it remains to be seen whether the Court, if faced with a putative humanitarian intervention, will consider the use of force to constitute a "manifest" violation of the United Nations Charter.
We have discussed this issue in more detail here.
by Beth Van Schaack at 6:10 AM