Following our extended series on the crime of aggression and the recently concluded ICC Review Conference, this post discusses several "understandings" added to the final package of amendments concerning the definition of the crime of aggression and its impact outside the Court.
By the time the Review Conference opened in Kampala, delegates had arrived at a consensus definition of the crime of aggression that was loosely based on General Assembly Resolution 3314 but contained subtle yet significant departures from that text. As it turned out, the definition was the only component of the initial Conference Room Paper that was entirely unbracketed. Even the so-called P-2 (France and the United Kingdom) had accepted the definition prior to Kampala, although in a later intervention, France insisted that its approval was tied to the existence of a Security Council filter. 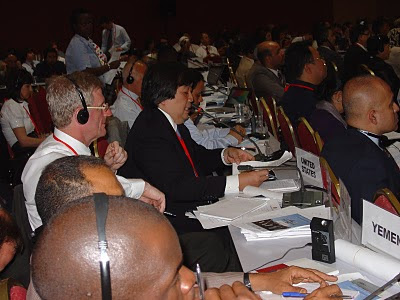 From that point, the United States focused on achieving key “understandings” to be inserted into the amendment package at Annex III, which contained a number of other draft and consensus understandings. These understandings sought to

consider these proposed understandings. After a series of informal discussions, he brought forward three sets of proposals for further consideration and debate in a special working group session on June 9, 2010, explaining his “minimalist” approach on the fact certain the other understandings “met with significant reluctance.” The three considered were
Following up on our prior discussion on complementarity and the crime of aggression, I'll address the first proposed understandings in this post, and the latter two in a subsequent post.
The complementarity understandings addressed potential implications of the definition of the crime outside the Court. This text built on existing language in the Conference materials concerning the propriety of the exercise of domestic jurisdiction over the crime of aggression in the event an amendment to the Statute was adopted, particularly in light of the principle of complementarity. The first Conference Room Paper on the Crime of Aggression (released June 6, 2010) contained draft text to the effect that

It is understood that the amendments address the definition of the crime of aggression and the conditions under which the Court shall exercise jurisdiction with respect to this crime for the purpose of this Statute only. The amendments shall, in accordance with article 10 of the Rome Statute, not be interpreted as limiting or prejudicing in any way existing or developing rules of international law for purposes other than this Statute. The amendments shall therefore not be interpreted as creating the right or obligation to exercise domestic jurisdiction with respect to an act of aggression committed by another State.

The United States proposed three changes to this language:
In an intervention in a plenary session, the United States explained that the point of the first two of these proposed changes was to further emphasize that the amendments would be adopted solely for the purpose of prosecutions under the Rome Statute and that there is a divergence of views among states about as to whether the definitions of “crime of aggression” in Article 8-bis(1) and “act of aggression” in Article 8bis(2) reflect statements of customary international law. The ultimate goal was to undermine any tendency to reference these definitions as evidence of the progressive development of customary international law. The last change was meant to signal a separate point: that that states are not obliged to incorporate the crime of aggression into their domestic codes, or launch domestic prosecutions for the crime, upon ratification or acceptance of the aggression amendments.
The proposed language in 4bis met with little discussion or resistance, although ultimately the words "customary international law" were not included. Professor Kress forwarded the new language of Understanding 4bis to the Chair of the Working Group and it later appeared as follows in a Conference Room Paper:

4bis: Domestic jurisdiction over the crime of aggression

It is understood that the amendments that address the definition of the act of aggression and the crime of aggression do so for the purpose of this Statute only. The amendments shall, in accordance with article 10 of the Rome Statute, not be interpreted as limiting or prejudicing in any way existing or developing rules of international law for purposes other than this Statute. It is understood that the amendments shall not be interpreted as creating the right or obligation to exercise domestic jurisdiction with respect to an act of aggression committed by another State.

In the final package of amendments, the two elements of 4bis (definition and jurisdiction) were bifurcated into separate understandings.
There is no express requirement within the treaty that State Parties harmonize their domestic penal codes with the Rome Statute. The only mandatory language regarding domestic legislation concerns state cooperation (Part 9) and the obligation to assert jurisdiction over offenses against the administration of justice (Article 70(4)). The preambular language referencing domestic jurisdiction arguably recalls pre-existing obligations for all “States” (not just State Parties) to prosecute international crimes, but creates no new obligations for domestic implementation or prosecution. By this view, the principle of complementarity creates only a rebuttable presumption of inadmissibility, unless no credible domestic prosecution—for an international crime or its domestic analog—is going forward. Nonetheless, as part of the process of ratification, states have tended to update their penal codes to be consistent with the ICC Statute so that they may take advantage of the principle of complementarity.
Very few states have a definition of aggression on the books. (The best study

of this topic was done by Astrid Reisinger Coracini of the University of Graz (left), who attended the Kampala Conference on behalf of Austria.) Most of these definitions appear, perhaps not surprisingly, in the penal codes of the states of central Asia and Eastern Europe. Most statutes pre-date the ICC and are loosely premised on the definition of crimes against the peace in the Nuremberg/Tokyo Charters, are denominated as waging or planning a “war of aggression," or contain no definition whatsoever. Most do not subject the crime to universal jurisdiction, but rather premise domestic jurisdiction on principles of territoriality or nationality. Beyond the immediate post-WWII period, there is very little domestic jurisprudence on the crime of aggression, as we've discussed.
It thus remains to be seen whether states will incorporate the crime of aggression into their domestic penal codes, notwithstanding the Understandings adopted in Kampala.
by Beth Van Schaack at 6:00 AM