(Delighted to welcome back IntLawGrrls guests/alumnae Brigid Inder, Kate Orlovsky, and Katrina Anderson who contribute this guest post to IntLawGrrls' series on the ICC Kampala Conference) 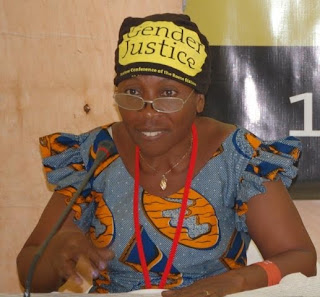 KAMPALA, Uganda -- On Tuesday, June 1 the Women’s Initiatives for Gender Justice organized an all-day Women’s Court during the Review Conference of the Rome Statute (pictured at left and below right). The Women’s Court featured presentations from women's rights and peace activists from Uganda, Central African Republic, Democratic Republic of the Congo, and Sudan, who spoke about the impact of these conflicts on women, the targeting of women by armed forces and militia groups for crimes of sexual violence and their work for justice, accountability and peace. The Women’s Court held four sessions, each focusing on an ICC situation country, and was moderated by experts including Nobel Peace Laureate Wangari Maathai (pictured below right, at left), Silvana Arbia, Registrar of the International Criminal Court, Bukeni Waruzi, Lead Campaign for Gender-based violence at Witness, and Elisabeth Rehn, Chairperson for the Board of Directors for the ICC Trust Fund for Victims (whose session was discussed further in Valerie Oosterveld's post yesterday).
The Women’s Court followed in the footsteps of the 1993 Vienna Tribunal on Women’s Human Rights and the 2000 Tokyo Women’s Tribunal. These tribunals, with their compelling testimony by women victims/survivors of armed conflict, helped pave the way for international tribunals to prosecute gender-based crimes as international crimes. Like its predecessors, the aim of the Women's Court was to draw attention to the particularized harms that women and girls experience during armed conflict and the fact that crimes against women continue to be under-investigated and prosecuted. Rather than making a determination of guilt or delivering a formal ‘judgment’, the purpose of the Women’s Court was to ensure that the voices and experiences of victims — and especially women — assume an appropriately central role at the Review Conference.

Timed to precede the stocktaking process scheduled for the first week of the Review Conference, the Women’s Court provided a forum for victims/survivors and women’s rights advocates to express their views on the four stocktaking themes (the impact of the Rome Statute system on victims and affected communities, peace and justice, complementarity and cooperation). The presenters shared their views about the impact of armed conflict on women, their desire for accountability for perpetrators of gender-based crimes, their hope in the ICC to deliver on its promise of justice, and the specific challenges they face in their work for justice, peace, and reconciliation. And while affirming the importance of the ICC as a mechanism for accountability, they also expressed frustration over the delay in trials, failure of governments to execute arrests and cooperate in other ways with the Court, and lack of information about the Court’s role in bringing justice and peace.
Memorable quotes from presenters at the Women’s Court include:
On peace and justice: “Women want to be included in the formulation of any justice mechanisms and not to be treated as victims or survivors, which is the practice now.” - Rosalba Oywa, Uganda
“We would like the stocktaking process to look at those who accommodate war criminals and provide the guns.” - Joyce Lakot, Uganda
On the impact of the Rome Statute system on victims and affected communities:
“The ICC has not yet met its objective as people are not informed about the way it functions or even its existence. We think there is a lack of information towards the population in general and towards victims in particular.” - Francine Banja, Democratic Republic of the Congo
On complementarity: “It is imperative that Ugandan prosecutions of crimes committed should be conducted with the same standards as the Rome Statute, the highest standards of international law. The domestic process should include the Elements of Crimes and the Rules of Procedure and Evidence used at the ICC. There is urgency to create the special court to supplement the ICC within Uganda, but we expect the special court to be independent, impartial and effective.” - Akwero Jane Odong, Uganda (pictured above right, at right)
On cooperation: “We must fight cross-border impunity. We are not going to be scared by threats to human rights defenders by the Sudan government -- threats that have been happening for the past 20 years.” - Osman Hummaida, Sudan

by Brigid Inder, Kate Orlovsky + Katrina Anderson at 6:16 AM