As we've blogged before (see here, here, here, here, here, and here, among others) the question of whether the violence in Darfur rises to the level of genocide has been an issue of some dispute. Today, Pre-Trial Chamber I of the International Criminal Court issued a second warrant of arrest against Omar Al-Bashir, the newly re-elected President of Sudan. The issuance of the warrant is based on a finding (per Art. 58) that "there are reasonable grounds to believe" he is responsible for genocide against protected ethnic groups.
The particular manifestations of genocide charged are: 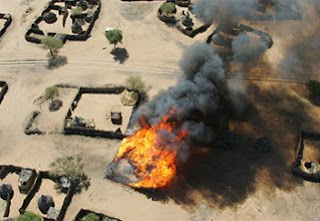 The first arrest warrant covering war crimes and crimes against humanity (issued in March 2009) remains extant.
As you may recall, the Pre-Trial Chamber originally rejected the Prosecutor’s application for a warrant of arrest in respect of the crime of genocide. In July 2009, the Prosecutor appealed this decision. The Appeals Chamber in Feburary 2010 reversed and remanded, finding that the Pre-Trial Chamber had applied the wrong standard of proof. The new arrest warrant is the result of a reconsideration of all the evidence under the appropriate burden of proof. It concludes that there are reasonable grounds to believe that Al-Bashir acted with specific intent to destroy in part the Fur, Masalit and Zaghawa ethnic groups. (Photo, left, from the U.S. Holocaust Memorial Museum, which has excellent facts and figures on the crisis in Darfur here).
The Registrar will now prepare and submit a supplementary request for cooperation to the Sudanese authorities, all State Parties, and the Security Council, which originally referred the situation to the Court in March 2005.
At the moment, four cases are being heard in the Darfur situation: