(Delighted to welcome back alumna Margaret deGuzman, who contributes this guest post on Crimes Against Humanity, her forthcoming book chapter) 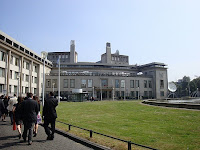 In the summer of 1997 I was a law student intern in the Legal Advisor’s Office of the Office of the Prosecutor of the International Criminal Tribunal for Former Yugoslavia at The Hague (left). When I walked in the door I was told that my assignment was to try to figure out the mens rea of crimes against humanity.
I was shocked. Surely someone who had spent more than a semester studying criminal law had already worked out the elements of crimes against humanity?
I spent a fascinating summer digging through cases decided under the Nuremberg Charter and under Control Council Law No. 10, as well as anything else I could get my hands on that might provide some insight into the mental element of crimes against humanity. (In those days, international criminal law sources were not as readily available as they are now.)
In the end I wrote an article that argued, as much on policy grounds as on precedent, that the mens rea should involve knowledge of the connection between the individual’s inhumane act and the broader attack against a civilian population. I like to think that my work influenced the adoption of the knowledge standard in the Appeals Chamber's July 15, 1999, Judgement in Tadić, but who knows?
I have remained fascinated with crimes against humanity ever since. One of the things that most intrigues me is that although this category of crimes is supposed to represent, along with genocide, the worst of the worst that people can do to each other, there is still lots of uncertainty about the elements and the theoretical underpinning of the legal prohibition.
The persistent uncertainties surrounding crimes against humanity are due in part to their historical origins. After World War II, the Allies wanted to prosecute the Nazis for crimes committed within German territory, conduct that was not covered by the laws of war. They found purchase for the new crime in the Martens Clause, part of the preamble of the Hague (IV) Convention Respecting the Laws and Customs of War on Land. Invoking natural law protections for any lacunae in the laws of war, the Martens Clause provides that persons not otherwise covered in the 1907 Convention

remain under the protection and rule of the principles of the law of nations, as they result from the usages among civilized peoples, from the laws of humanity, and the dictates of the public conscience.

From those cryptic words, a new category of international crimes was born, without any diplomatic negotiations, drafting committees, or treaty ratifications.
This unusual history is only partly to blame for the persistent uncertainties that surround crimes against humanity, however. Figuring out what is meant by “crimes against humanity” has simply proven tricky for many smart people over the years. The International Law Commission debated the matter for decades, diplomats pondered the elements when they drafted the statutes of the ad hoc tribunals, and the international community spent years trying to work out a definition for the Rome Statute of the International Criminal Court. Nonetheless, the ICC definition, in some ways the culmination of all these efforts, remains controversial in a number of important respects. Furthermore, the normative justification for crimes against humanity continues to engage deep thinkers, as illustrated by a number of recent treatments by such scholars as David Luban, Larry May, and Richard Vernon.
I explore some of the persistent normative debates and doctrinal

ambiguities that surround crimes against humanity in my contribution to the forthcoming The Routledge Handbook on International Criminal Law, edited by our colleagues, William A. Schabas and IntLawGrrl guest/alumna Nadia Bernaz. My chapter first provides an overview of the evolution of the definition of crimes against humanity, before surveying the competing normative visions of this category of crimes. A number of justifications have been advanced for international jurisdiction over crimes against humanity, including that they:
► Threaten international peace and security;
► Are particularly grave and thus shock the conscience of humanity;
► Involve actions of states or state-like organizations that would otherwise go unpunished; and
► Target groups rather than isolated individuals.
I conclude that ultimately none of these approaches provides a clear and complete rationale for categorizing certain inhumane acts as crimes against humanity.
I then explore the doctrinal debates that necessarily result from the lack of clear philosophical underpinnings for these crimes:
► What constitutes a widespread or systematic attack?
► Is a policy required and, if so, what kind?
► What defines a “civilian population”?
► What connection is required between the individual inhumane act and the broader attack?
Last year, a group of experts on crimes against humanity gathered in St. Louis at the invitation of Washington University Law Professor Leila Nadya Sadat, an IntLawGrrls guest/alumna, to consider a Convention on Crimes Against Humanity. Initially, there was much discussion of how to “improve” the definition for inclusion in the Convention. Ultimately, however, the organizers decided it would be unwise to create a new definition that would compete with that included in the Rome Statute and simply adopted the latter’s definition. Perhaps the debates about crimes against humanity will now subside, and the Rome Statute’s definition as interpreted by the court will gain general acceptance.
In the meantime, I’ll continue to be intrigued.
by Margaret deGuzman at 8:00 AM