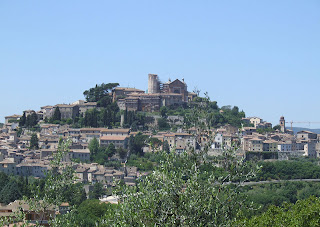 (Delighted to welcome back alumna Jennifer Kreder, who contributes another this guest post)

AMELIA, Umbria, Italy -- The field of cultural property is not just about restitution. It’s also about preservation of monuments, objects, heritage and the archaeological record, among other things. When objects are clandestinely ripped from the ground for the black market, their contexts are destroyed, and we lose historical data from which we would know so much more about beautiful objects.
I’m currently writing during a sleepless, hot night in this beautiful town outside of Rome, a place 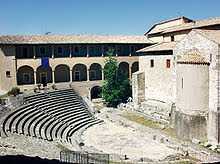 with a rich history.
The region, Umbria, is a place of incredible archaeological richness. (credit for photo at left of Roman Theatre at Spoleto in Umbria)
At the top of this hill city, Amelia (above right), is featured a tower outside the beautiful Catholic church; it utilizes Roman and pre-Roman archeological materials. (photo credit)
When I was still in Rome, I managed to squeeze in time at the Roman Forum, Palatine, Borghese Galleries (and surrounds) and at the Piazza Navona (for tartufo, the ice cream dessert below right).
But, I must return to my husband and four-year-old son. My son

believes part of my mission to Italy was to determine which Transformers (below left) Italian kids like. The outcome of this anthropological study remarkably coincides with the secret Transformer stash in our basement.
Anyway . . .
By 1909, Italy passed its first “in-the-ground” statute, which vested ownership of all unearthed antiquities in the state. Greek vases have nonetheless, since then, been dug out of Roman soil by the truckloads. They have trafficked through “reputable” dealers into some of the most esteemed museums in the

world. A few of our most esteemed institutions that have returned loot, among them The Getty in Southern California, the Cleveland Museum of Art, and the Metropolitan Museum of Art in New York. Over 100 objects have been returned from U.S. museums and collectors in the last three years or so, largely as a result of Polaroids found in a raid on a Swiss warehouse in a Geneva airport, as documented in The Medici Conspiracy: The Illicit Journey of Looted Antiquities--From Italy's Tomb Raiders to the World's Greatest Museums, a 2006 book by Peter Watson and Cecelia Todeschini. Some of those antiquities are now on display in Rome, including in the National Etruscan Museum in the Villa Giulia.
The 2010 Conference on the Study of Art Crime was the occasion for my trip to Italy. It was hosted by ARCA, the Association for Research into Crimes against Art, a think tank which runs the first master's program in the interdisciplinary field of art theft.
Conference presentations, which will be posted on-line in the near future, covered a diverse array of fields, including:
► Museum security,
► Cultural identity,
► Archaeology,
► The relationship of looting and terrorist funding, and
► Nazi-looted art.

I particularly enjoyed hearing from Giovanni Pastore, former Vice-Commandant of the Carabinieri Division for the Protection of Cultural Heritage and an ARCA trustee. Part of his presentation was broadcast on Italian television.
* * *
Do you love antiquity? History? Beautiful objects? Culture? Heritage? Art – old or new? If so, I hope you’ll consider joining the American Society of International Law Interest Group on Cultural Heritage and the Arts (prior post), for which I serve as co-chair, or contributing to our Cultural Heritage & the Arts Review (prior post), which our interest group publishes.
Our field is highly polarized. Very few of us agree with each other on all issues, but most of us are open to a good debate and to introduction of new views. The field consists of a small number of lawyers, but a much larger community of people involved in archaeology, site preservation, government, museums, collecting, auction houses, military, indigenous groups and other organizations, and there is room for more -- more profs, law students, and others! Join us to learn about the law surrounding cultural property and heritage!
(A version of this post appeared at PrawfsBlawg)
by Jennifer Kreder at 6:10 AM