So says the presiding judge of the Extraordinary Chambers in the Courts of Cambodia, in Khmer, in this 10-minute video clip of today's verdict against Kaing Guek Eav (alias Duch), about whose trial we've blogged here. The 67-year-old Duch, stoic during the reading of the verdict, was convicted of war crimes, crimes against humanity, murder, and torture, and sentenced to "35 years in prison -- with five years taken off that sentence for time served." 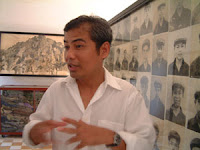 'It's clear that he will never be a free man again.'