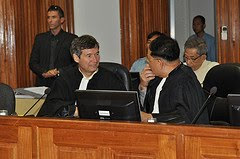 We've blogged before on the remarkable denouement of the trial of Kaing Guek Eav (alias Duch) (below right) wherein the defendant all but changed his plea in the final moments of the trial, eviscerating the careful defense that had been constructed for him by his brilliant Co-Defense Counsel, François Roux, and driving a final wedge between his foreign and Cambodian co-counsel (left). The latter, Kar Savuth, had himself also surprised everyone in attendance with an impassioned closing argument on behalf of his client; he attacked the prosecutor's case on both substantive and jurisdictional grounds, and asked for an acquittal on all counts in the Closing Order.
Not surprisingly, perhaps, it was announced Friday that Duch has officially asked to withdraw Roux as his Co-Defense Counsel. Defendants are allowed to change their counsel only under "exceptional circumstances."
The Defense Support Section of the Extraordinary Chambers in the Courts of Cambodia issued an administrative decision allowing for the withdrawal on the grounds that:
Savuth will represent Duch at the reading of the verdict on the 26th of this month. Roux, meanwhile, has taken the position as chief defense counsel for the Special Tribunal for Lebanon.
In other news from the ECCC, Secretary-General Ban Ki Moon recently announced that he would appoint a U.N. Special Expert 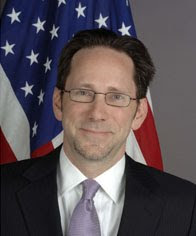 on the Extraordinary Chambers in the Courts of Cambodia to monitor the tribunal and endeavor to prevent political interference. The scuttle is that the position will be taken up by Clint Williamson (left), former U.S. Ambassador for War Crimes Issues, starting very soon.
by Beth Van Schaack at 6:10 AM