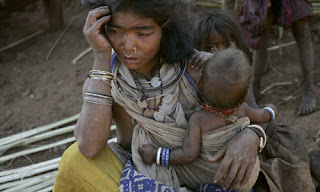 (Delighted to welcome back alumna Nadia Bernaz, who contributes this guest post)

With BP making the headlines with the industrial disaster in the Gulf of Mexico (prior IntLawGrrls posts), many have been asking the question of how and whether giant corporations can be made accountable for their actions.
The fact is that a combination common in the Western world -- tighter laws governing pollution and higher standards -- has not worked. Rather, it has often meant that multinational corporations, which no longer have to respect national boundaries, move elsewhere, where standards are lax and land and labour is cheap.
The growing movement for volunteerism among corporate entities based on corporate social responsibility has had some benefit: it has highlighted the social responsibility that companies have when they invest in a given area. (Prior IntLawGrrls posts) However, it has also allowed many corporations to engage in green-washing their image through the display of sophisticated policies printed in expensive brochures.
A new story that has attracted some attention recently concerns the activities of the Vedanta mining concern, one of Britain’s largest companies, who have built an aluminium producing plant in Orissa, in the east of India. Vedanta now wishes to mine bauxite in the region in order to get the plant running at full capacity.

Orissa is one of India’s least developed states, with some of the poorest people in the world, with many indigenous tribes among them. It has been known for a long time that this part of India holds significant deposits of mineral resources, but with India speeding towards accelerated development, these resources have suddenly become crucial to sustaining growth.
Vedanta maintain that their mining activities would bring jobs and increasing wealth to the local population. However, the indigenous Dongria Kondh tribe strongly oppose mining in their sacred mountains, and are concerned about the environmental impact of this activity in the region. An Amnesty International report issued in February supports their view.) The tribal members argue that they do not want to change their ancestral way of life, and have no interest in the type of development Vedanta has promised them. (credit for photo by Parth Sanyal /Reuters, captioned "A tribal woman with her child near the mining site of the alumina refinery in Orissa state")
From an international legal perspective, the Vedanta story raises several important issues:
► The increased power of transnational corporations has made the seeking of accountability for their actions extremely difficult in environments where they may be able to operate freely, and often with the complicity of the government.
► While globalisation itself cannot be regulated, it is clear that new norm creation activities have been taking place in international law, not least with the presence of the World Trade Organisation.
► However, little of the ethos concerning human development and poverty alleviation feeds into these important discussions.
To address these challenges, my home institution, Middlesex University in London, England, has created an MA programme in Human Rights and Business. The course covers areas of law such as international human rights law and the law of the WTO, and explores the relevance of these areas to multinational corporations -- especially those corporations operating in emerging economies. The modules are

deliberately human rights law-centred, and go significantly beyond the concept of corporate social responsibility. The programme itself is tailored for busy professionals with significant online content and class contact restricted to two days a month (Friday-Saturday). More information here.
by Nadia Bernaz at 4:20 AM