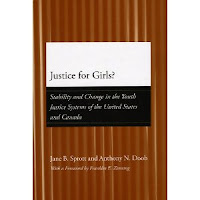 For over a century, concerns have been expressed about a ‘crime wave’ involving women and girls. Freedoms and greater equality for women were thought to be a cause. Recent concerns in the United States and Canada have, similarly, blamed perceived increases in crimes by girls on equality and equal opportunity. The only problem is that credible evidence of a ‘crime wave’ involving young girls does not exist.
More important than this phantom crime wave are credible data demonstrating that girls are being treated differently from boys by the youth justice systems of both Canada and the United States. Because the justice system’s response to girls is an understudied topic in most developed nations and it has never been the subject of transnational comparative assessment, the aim of Justice for Girls?, the 2009 monograph that I coauthored with Dr. Anthony N. Doob, was to review the social and legal developments in two countries, the United States and Canada, on the assumption that a comparative approach would help unravel the puzzles of girl crime and justice.
The separate justice systems for youths that were developed in the early 1900s in each country initially had very broad mandates and aimed simultaneously to divert youths from the adult system and to provide services to help ‘reform’ or ‘rehabilitate’ them. In both countries a disproportionate number of girls were brought into the system and sentenced to custody for non-criminal or ‘status’ offences. The stated goal, however, was not punishment: each country justified the inclusion of status offences as being a mechanism to accomplish rehabilitation. Although boys were much more likely to cause trouble in the community, girls, for most of the first two-thirds of a century of juvenile justice, appeared to be the special targets of rehabilitative interventions in both the United States and Canada.
In the 1960s the acceptability of placing status offenders in custody declined. In Canada, a 1965 federal report explicitly recommended removing status offences from the jurisdiction of the Act. But this was not accomplished until 19 years later. Although certain rights were addressed by the U.S. Supreme Court in the 1960s, federal legislative change related to status offences first occurred in the United States in the mid-1970s, with the enactment of the Juvenile Justice and Delinquency Prevention Act. Unlike in Canada, one of the key goals in the American 1974 Act was only to reduce the use of custody for status offences.
Avoiding intervention into the lives of troubled and troublesome children was difficult to accomplish in both countries. During the final quarter of the 20th century, both countries had developed mechanisms to ensure that youths could be placed in custody if they violated orders of the court. Offences were created:

► In the United States, the offence of ‘violating a valid court order’ (which could have been originally imposed for non-criminal behavior), and

► In Canada, the offence of ‘failing to comply with a disposition’ (in which a youth originally had to have been found guilty of an actual offence for which a normal sentence was imposed).
Each of these had the effect of allowing youths to be incarcerated for ‘normal’ youthful behavior – violating the edicts of their elders (in this case judges). Thus, both countries maintained what are, in effect, status offences, and used them somewhat disproportionately with girls. Minor offences and status offences continued to push girls into the justice system.
The constitutional differences between the United States and Canada make the comparison between the two countries more complex, yet also more interesting:
► The U.S. federal government obviously plays a limited role in juvenile justice legislation since the legislation is a state responsibility.
► In contrast, Canada’s youth justice legislation is a federal responsibility. With only one government responsible for youth justice legislation, it is not surprising that changes were more dramatic in Canada than in the United States.
During the latter half of the 20th century, the incarceration of girls in Canada and the United States declined slightly. However, since the 1970s the United States experienced an explosion in the use of imprisonment, while Canada experienced relative stability. In that context, it is remarkable that the United States saw a decline in the imprisonment of girls that was comparable to the best estimate of what was happening in Canada. What sets Canada apart from the United States is what happened after 1 April 2003, when Canada’s new youth justice legislation was enacted: a dramatic reduction, for both girls and boys, in the use of custody.
There are, however, still concerns that girls are more likely than boys to be incarcerated for very minor offending. In Canada the best existing data suggest that there are still more girls relative to women in custody, while in the United States there are slightly fewer girls relative to women in custody. Given that in both countries there are substantially fewer boys relative to men in custody, and that girls commit less serious offences and have less extensive criminal histories than boys, girls should not be seen in custody as much as they are – if the reason for incarcerating them is their offence and criminal record.
This two-nation comparison shows that the persistence of protectionist incarceration over time is a strong element in both nations despite the policy efforts to reduce it and the obvious progress that has been made. Until quite recently, the two nations did not differ substantially in their success in eliminating protective incarceration. However, in 2003 Canada’s new youth justice legislation had a dramatic effect in reducing the incarceration of girls. The allocation of political responsibility for juvenile justice in the United States does not allow federal legislation to have the same impact as the Canadian reforms of 2003. Nevertheless, changes in U.S. state systems could produce similar changes with similar impacts. The Canadian trends suggest that U.S. systems could reduce dramatically the incarceration of girls (and boys) – if there were a will to do so.