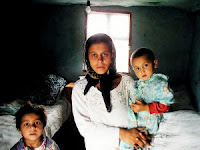 Immigrants and their advocates in the United States breathed a sigh of relief on Wednesday as a federal district judge enjoined the harshest provisions of Arizona's draconian new immigration law from taking effect. That same day, across the pond, a human rights NGO spoke out against a "racialized vision of society in which a human group, though heterogeneous, is treated as criminogenic." L'Arizona? Non. La France? Oui.
In response to a riot last week (sparked by the police shooting a man dead) involving fifty travellers in central France, President Sarkozy announced Wednesday plans to dismantle 300 Roma and traveller camps across the country as part of his "war on crime and urban violence". In fine Arizona style, he also ordered the "almost immediate" expulsion of Roma from Bulgaria and Romania who have committed offenses against the public order and promised new legislation to make it easier to deport groups like the Roma for security reasons. (See too migration post below.)
The move has sparked concern on the part of human rights groups about promoting negative perceptions of the 400,000 travellers living in France, 95 percent of whom are said to be French nationals. Sarkozy's Interior Minister's responded by claiming that the measures "are not meant to stigmatize any community, regardless of who they are, but to punish illegal behavior". Evidemment. 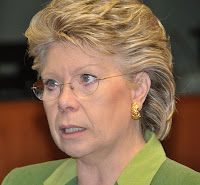 And what did the European Commission have to say about all of this? Oui, bien sûr. Ben -- c'est-à-dire, peut être. Agence France Presse first reported that the European Commission had assented to Sarkozy's new policies, quoting the spokesperson for Viviane Reding, the Commissioner for justice, fundamental rights, and citizenship (pictured right) as saying, "European laws on the free movement of European citizens provide EU member states with the right to control their territory and combat crime." That provoked a response from Reding's spokesperson, who stated that AFP had misinterpreted the prior statement, and that the Commission was "neither for nor against" France's proposal to expel Bulgarian and Romanian Roma on security grounds. C'est clair?
The Romanian government, on the other hand, has minced few words in its assessment of France's approach (calling to mind Mexican President Felipe Calderon's response to the Arizona law). After the Minister of Justice declared Romania's readiness to cooperate with France, he noted that "cooperation does not mean using bulldozers to destroy camps and publicly blaming Roma." The Romanian Minister of Foreign Affairs expressed a similar willingness to cooperate, before suggesting that EU member states should be able to address criminal activity without resorting to ethnic stereotypes. He argued that "the solution to the Roma's socio-economic difficulties is social inclusion in the societies in which they live, whether in their country of origin or host state, in strict respect of human rights." Bucharest called for a European solution "to complement national efforts in areas such as education, professional training, health, and housing." On va voir.
(Hat tip to Diane Marie Amann for the Le Monde article; translations, and any errors therein, are mine.)
by Jaya Ramji-Nogales at 6:16 AM

Hi -
As a community organizer in Providence, RI working with undocumented people to resist police repression and to build transnational power among remitters, I want to tell you how much I appreciate IntLawGrrls for the knowledge and perspectives you transmit.

But I need to share one important correction - the only sigh of relief at the court decision re SB1070 was among the DC advocacy groups. The folks working in Arizona, and on the ground in communities like ours under similar (if less draconian) attacks find nothing to celebrate in this decision. Many of the worst provisions are left standing, especially those that encourage vigilantism by the evergrowing immigrant-haters and outlaw communities supporting each other. And even those provisions that are stayed could still end up completely in place.

So please, spread the word - this decision is nothing to celebrate! That's why communities around the U.S. still marked the day with protests. For instance, here in RI 100 people filled the campaign office of the leading candidate for governor demanding that he commit to taking specific steps to outlaw racial profiling and dismantle the police state that's in effect against people without papers and other people of color.

Thanks for all your great work, and hope this brief commentary is helpful.

Thanks for your comment, Shannah, and for your work on behalf of undocumented populations. While the result may not be the best we could have hoped for (hence a sigh of relief rather than a cheer of joy!), it could have been an unmitigated disaster had the entire law been left standing. So I'm not sure I agree that there's nothing to celebrate, but I do agree that it's important to raise awareness about the harmful consequences of the remaining provisions of the law. Thanks for sharing your perspective with us!