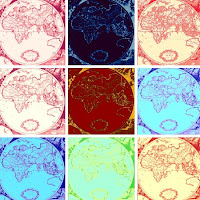 (Today alumna Jennifer Kreder contributes another On Art! guest post, prompted by her work in a pending looted-art case; her 1st, related post is here)
The Executive Branch of the United States long has carried out a consistent policy respecting art looted by Nazi Germany. This policy bears on the lawsuit in which heirs lay claim to certain paintings now in the George Grosz collection of the Museum of Modern Art in New York.
In January, a trial court dismissed the lawsuit as time-barred without reference to the complex historical factors delaying the heirs' assertion of their claims. In so doing, the court contravened foreign policy goals that 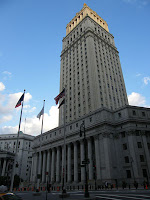 the United States and the Allies pursued during and immediately after World War II and that a broad coalition of states pursued, via diplomatic breakthroughs, in 1998, 2000, and 2009. I detail the history in this post, which derives from the amicus brief that I co-authored in support of the heirs' pending appeal to the U.S. Court of Appeals for the 2d Circuit in Manhattan (courthouse at right).
In the normal course of judicial administration touching on foreign policy, federal judges typically defer to determinations of policy matters by the executive branch.
One example of this rule unfolded in mid-20th C. litigation of Bernstein v. N. V. Nederlansche-Amerikaansche Stoomvaart-Maatschappij. In a 1949 decision in Bernstein, 173 F.2d 71, the 2d Circuit ruled inadmissible statements in which a Jewish victim of persecution described the brutal Nazi imprisonment that led him to “transfer” major assets under duress. To admit such evidence, the court reasoned, would denigrate a foreign country. Then, however, with regard to the same litigation, Jack B. Tate (below left), Acting Legal Adviser in the U.S. Department of State, wrote, as quoted here, of his 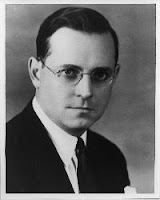 Government’s opposition to forcible acts of dispossession of a discriminatory and confiscatory nature practiced by the Germans on the countries or peoples subject to their controls . . . [and that] the policy of the Executive, with respect to claims asserted in the United States for restitution of such property, is to relieve American courts from any restraint upon the exercise of their jurisdiction to pass upon the validity of the acts of Nazi officials.

Having thus been informed of the government’s views of coerced “transactions” during the Nazi era in Germany, the 2d Circuit's 1954 judgment in Bernstein reversed its previous ruling in the same case.
This Tate letter was in no means the only exemplar of U.S. executive policy.
U.S. diplomats led efforts to warn other countries against looting in the landmark London Declaration of January 5, 1943, which

declare[d] invalid any [coerced] transfers of, or dealings with, property . . . whether such transfers or dealings have taken the form of open looting or plunder, or of transactions apparently legal in form, even when they purport to be voluntarily effected. 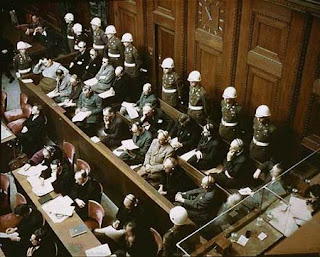 Immediately after the war, moreover, the International Military Tribunal at Nuremberg (right) -- convened by the United States along with Britain, France, and the Soviet Union -- had evaluated detailed evidence of coerced sales. (photo credit) The plunder of art was declared a war crime, and is so recognized today. At Nuremberg, it was perfectly clear to the factfinders who had done what and to whom. Thus the Tribunal convicted Alfred Rosenberg, head of the Einsatzstab Reichsleiter Rosenberg art-looting unit, and sentenced him to death by hanging.
Shortly thereafter in Bonn and Vienna it was made clear in, for example, Military Government Law 59, that Germany and Austria had to repudiate all spurious “transactions” of the entire Nazi era, including art “deals” that were really seizures.
Thus, the model chosen was a restitution model for individual claims, and these claims were not subsumed in reparations paid after the war -- reparations that became limited as the United States implemented the Marshall Plan.
The amicus brief that I co-authored argues that the 2d Circuit must, as it did in its 1954 Bernstein ruling, accord to the Executive the deference described in the Tate letter.
Diplomats from the State Department, particularly Ambassador Stuart E. Eizenstat, played a leading role in securing multilateral public commitments, by scores of countries, to effective, fact-based resolution of Nazi-looted art claims. For example: 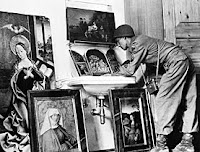 to develop national processes to implement these principles, particularly as they relate to alternative dispute resolution mechanisms for resolving ownership issues.

(credit for 1945 photo, republished during the 1999 Washington Conference, of U.S. soldier examining "paintings, part of the loot gathered from all parts of Europe by Hermann Goering, in 1945 in Germany")
► The 2009 Terezín Declaration similarly calls on countries to secure

just and fair solutions with regard to Nazi-confiscated and looted art, and to make certain that claims to recover such art are resolved expeditiously and based on the facts and merits of the claims and all the relevant documents submitted by all parties.

The Declaration further stresses that

Governments should consider all relevant issues when applying various legal provisions that may impede the restitution of art and cultural property, in order to achieve just and fair solutions, as well as alternative dispute resolution, where appropriate under law.

To give credit when due, this development in foreign policy was sparked in no small measure by Guidelines that the Association of American Museum Directors. Thus, it is quite shocking that some U.S. museums -- MoMA is one -- have interposed defenses like statute of limitations and laches. As demonstrated in this case-law chart that I've compiled, and as I've discussed further here, their efforts are all too often successful. This result thwarts the policy set forth above, distorting the historical record and law in the process.

(A version of this post appeared at PrawfsBlawg, where I'm guesting this month)