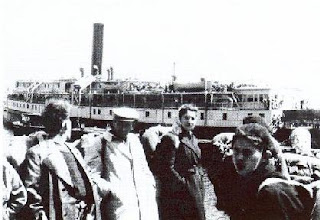 On this day in ...
... 1947, at the harbor in Sète, on the Mediterranean coast in the south of France, Jewish refugees -- 1,282 women, many of them pregnant, 1,600 men, and 1,672 children -- boarded a ship bound for Palestine. (photo credit) Conditions were cramped on the 19-year-old passenger steamer President Warfield, which was only 118 meters (129 yards) long. It set sail the next day, soon renamed Exodus 1947. But as the ship neared its destination, British destroyers seized it, killing "a Jewish crew member and two passengers," according to an account by the U.S. Holocaust Memorial Museum, which continues:

Attempting to make an example of the "Exodus 1947," the British transferred the passengers onto three navy transports which returned to Europe. ... The passengers were then transferred to displaced persons camps in Germany.
Displaced persons in camps all over Europe protested vociferously and staged hunger strikes when they heard the news. Large protests erupted on both sides of the Atlantic. The ensuing public embarrassment for Britain played a significant role in the diplomatic swing of sympathy toward the Jews and the eventual recognition of a Jewish state in 1948.