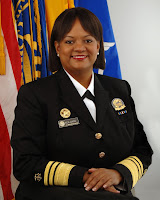 On this day in ...
... 2009, President Barack Obama announced his decision to nominate Dr. Regina Benjamin to be the 18th Surgeon General of the United States Public Health Service. Benjamin (left) was subsequently confirmed and is serving in that position, charged with "provid[ing] the public with the best scientific information available on how to improve their health and the health of the nation," and also "oversee[ing] oversees the operational command of 6,500 uniformed health officers who serve in locations around the world to promote, protect, and advance the health of the American People." Her prior accomplishments including founding and leading the Bayou La Batre Rural Health Clinic in Alabama, serving as Associate Dean for Rural Health at the University of South Alabama College of Medicine in Mobile, and becoming "the first African American female president of a State Medical Society in the United States." Benjamin was a MacArthur Fellow in 2008.