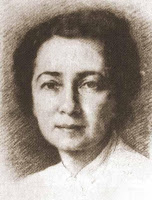 On this day in ...
... 1890 (120 years ago today), Rosa Hacohen was born in Gomel, a city in what was then Russia and is now Belarus. Following her graduation from a 2dary school in Odessa, in what is now Ukraine, she immigrated to Palestine, joining her parents who'd gone there before her. Eventually she moved to Paris to be with her husband. There Rosa Ginossar (right) studied law and worked at a law firm. In 1922 she 1st sought to take the bar examination in Palestine. She was refused repeatedly, notwithstanding global efforts on her behalf. (Emily Murphy leant Ginossar winning arguments from Canada's Persons Case (1920).) Finally, in February 1930, the Supreme Court in Palestine issued a decision permitting women to take the exam; Ginossar did so 48 hours later, and was admitted to the bar in July of the same year. "This struggle marked the first battle in her war to secure the right of women to serve alongside men in all sectors of life in Israel." Her practice included much work on behalf of refugees. She died in 1979.