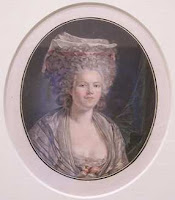 On this day in ...
... 1747 (though this site puts her birth at 1741), a daughter was born to "a family of small means" in Abbeville, Picardie, France. As Rose Bertin (left), she would become "the first celebrated French fashion designer." Following an apprenticeship she opened her own clothing shop on the Rue St. Honoré, where she catered to Versailles nobility and courtesans. Eventually Bertin would furnish millinery and garments -- most notably, extravagantly coiffed wigs -- to the Austria-born princess Marie Antoinette. Although the latter would die by guillotine, a queen deposed by the French Revolution, Bertin survived by moving her business to London for a time. She died in 1813 in Epinay sur Seine. (image credit)