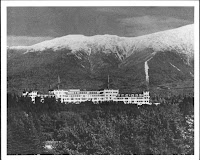 On this day in ...
... 1945 (65 years ago today), Senate-approved legislation leading to U.S. ratification of the Bretton Woods Agreement won "prompt acceptance" in the House of Representatives, which had okayed an earlier version before Senate deliberations began. The bill "was on its way by air to President Truman for his signature at Potsdam," Germany, where Truman was attending the Allied summit conference. Concluded at a 44-country conference at a resort hotel in Bretton Woods, New Hampshire (above left), in 1944, the agreement at issue called for establishment of global financial institutions that would foster economic reconstruction much needed after World War II.