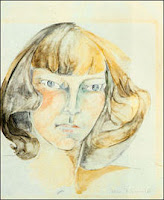 On this day in ...
... 1900 (110 years ago today), in Montgomery, Alabama, Zelda was born, daughter of an Alabama Supreme Court Justice, Anthony Dickson Sayre, and his wife, Minnie Buckner Machen Sayre. "[N]amed after the gypsy heroine of an obscure 1874 novel," as a teenager Zelda was a belle of country club society. A month after graduating from high school she met a young Army officer, F. Scott Fitzgerald. Their courtship and globe-trotting marriage inspired a trove of literature -- not only his novels and short stories, but also Zelda Fitzgerald's own works, like Save Me the Waltz (1932), a semi-autobiographical novel that's worth the read. This website, moreover, notes

the frequent addition of his name to her bylines on nearly two dozen stories and articles she produced between 1922 and 1934. In fact, Scott's agent or editors added his name in several instances without his knowledge because the joint byline increased the price that these works received from leading magazines.

Her efforts to succeed as a writer, then a painter (credit for her self-portrait above left, circa early 1940s), even a ballerina, as well as her separation from her husband and death in 1948 by a fire that swept through the hospital where she was being treated for depression, are recounted in Nancy Milford's biography, Zelda (1970).
(Prior July 24 posts are here, here, and here.)
by Diane Marie Amann at 4:04 AM