On this day in ...
... 1990 (20 years ago today), a Declaration of Sovereignty was adopted by the Supreme Soviet of Belarus, naming the Republic of Belarus (map below) 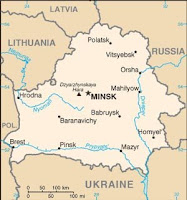 Thus did the Belarus (prior posts) break from the Soviet Union with which it had been affiliated since the end of World War II. This declaration was among many in 1990, "The Year of USSR Independence and Sovereignty Declarations," as Helsinki Watch, predecessor of Human Rights Watch, called it.