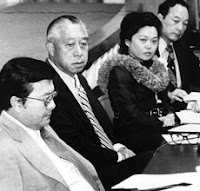 On this day in ...
... 1959, voters in Hawaii, which would become the 50th state in the United States the following month, made congressional history by electing Americans of Asian ancestry to 2 of 3 available positions. Republican businessman Hiram L. Fong became the 1st Chinese-American elected to the U.S. Senate from any state, while Democrat Daniel K. Inouye, a decorated veteran who lost a limb in World War II, became the 1st Japanese-American elected to the U.S. House of Representatives from any state. A third Asian-American candidate, the former President of Hawaii's Territorial Senate, lost a bid for the remaining Senate seat by fewer than 4,600 votes out of more than 162,800 cast. (credit for Honolulu Advertiser photo of Hawaii's congressional delegation in 1973; from left, Inouye, Fong, who would serve till 1977, U.S. Rep. Patsy Mink, and Spark Matsunaga) Still a Senator, Inouye was sworn in as "president pro tempore of the Senate, a mainly ceremonial position that ranks third in line of succession to the presidency," just last month.