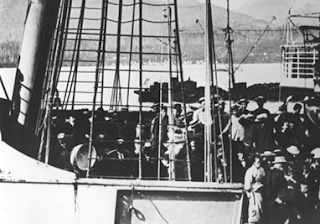 On this day in ...
... 1900 (110 years ago today), in response to anti-Japanese ferment in British Columbia, Japan forbade its people to immigrate to Canada. The provincial legislature nonetheless passed a statute further restricting Japanese immigration, in contravention of the Commercial Treaty of 1894,

which guaranteed Japanese the 'full liberty to enter, travel, and reside in any part of the Dominion of Canada.'

(credit for circa 1900 photo of Japanese emigrants ready to disembark) Canada's federal government stepped in and put an end to this and other subnational efforts to block immigration. (Sounds a bit like the current federal-state showdown on immigration (and see post above) to the United States, yes?)