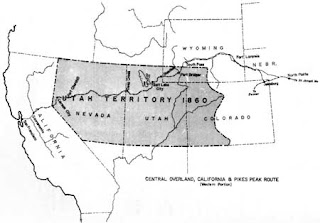 On this day in ...
... 1862, President Abraham Lincoln signed into law An Act to punish and prevent the Practice of Polygamy in the Territories of the United States and other places, and disapproving and annulling certain Acts of the Legislative Assembly of the Territory of Utah. (map credit) The statute made plural marriage a federal crime punishable by up to 5 years in prison. Preoccupied with the Civil War, Lincoln chose not to enforce the act. Enforcement would await later, postwar legislation.