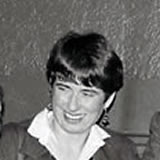 On this day in ...
... 1986, the Parliament of New Zealand passed the Homosexual Law Reform Act, which "removed criminal sanctions against consensual male homosexual practices." The law applied to males aged 16 and over. Although sex between women never had been against the law, "many lesbians suffered the same social discrimination as gay men and were staunch supporters of the reform movement." The Parliamentary sponsor of the bill was Fran Wilde (right), who'd been elected on a Labour ticket 5 years earlier. Later she would serve as Mayor of the City of Wellington.