(Delighted to welcome back alumna Jennifer Kreder, who contributes this guest post) 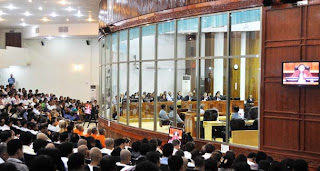 The first major Khmer Rouge defendant has been brought to justice with the 30-year sentence just handed down (left), as posted, by the Extraordinary Chambers in the Courts of Cambodia. (photo credit)
I believe postwar prosecutions for human rights violations are beneficial for victims, but that there are risks as well. When people who have committed heinous crimes get less than the maximum sentence, I think it is foreseeable that many victims will be hurt again. On the other hand, if every defendant gets the maximum sentence, the tribunal will not appear to be objective.
Then, there are other ways to deal with postwar open wounds, such as truth commissions and civil litigation, which may occur in courts beyond the borders of the nation that experienced war (often internal civil war).
I would love to hear others' viewpoints about these issues:
► What do you think is helpful for the individual victims and the nation, and why?
► Should U.S. courts hear postwar claims? If so, when and why?
► Should it depend on the location of victims who fled a murderous regime? Or on the location of their property? Or on whether significant remedies are available in the nation where the war occurred?
► Should it depend on a green light from the executive branch?
I am currently exploring the intersection of the "open wounds" idea and the cultural property arena. 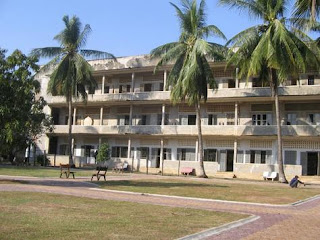 For example, Tuol Sleng (right), the prison where the just-sentenced defendant, known as Duch, led the torture and murder of so many innocents, is now a Genocide Museum.
Part of Tuol Sleng's roof collapsed last week. Some people said the souls of the dead were crying out for justice.
Certain types of property, real property and chattels, have meaning that transcends finances. Caring for such property thoughtfully can help heal postwar wounds, whereas its destruction can feel like new wounds to wartime victims.
Another example of the intersection of human rights, war, and cultural property concerns terrorism and antiquities that were found within the borders of modern-day Iran but now are located in U.S. museums.
In recent years Congress a number of laws purporting to give victims of terrorism means to redress:
► That part of the 1996 Antiterrorism and Effective Death Penalty Act that allows American victims to sue countries designated as sponsors of terrorism; and
► The Civil Liability for Acts of State Sponsored Terrorism Act, a/k/a the Flatow Amendment in honor of victim Alisa Flatow), which authorizes U.S. courts to award money damages to victims of terrorism.
In fact, this legislation has proved ineffectual -- a “sound bite” that has foisted conflicting jurisdictional mandates upon the federal courts, sucked terrorist victims into a vacuous, exhausting drama with no chance for justice, and interfered with the President’s ability to conduct diplomatic relations in the Middle East. 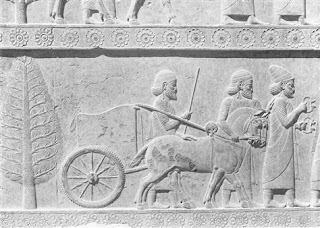 One group of victims is mired in multiple jurisdictions, trying to enforce an extremely large default judgment against the Islamic Republic of Iran by forcing auctions of antiquities like these Persian tablets, housed at the University of Chicago's Oriental Institute. Other collections subject to this complex litigation may be found at, to name a few sites, Harvard University, the Field Museum of Natural History in Chicago, and the Museum of Fine Arts in Boston. Congress, in this political posturing, required the U.S. Department of Justice to participate in the litigation in a way that runs counter to the victims’ interest. The victims likely feel ignored and maligned by their own President, while Congress all along was the master puppeteer of their false hopes. Kimberly deGraaf and I have co-authored an article on the subject, "Museums in the Crosshairs: Unintended Consequences of the War on Terror," forthcoming in the Duke Journal of Comparative & International Law.
No one believes that dealing with property ever will bring back the dead or afford full "justice" to victims. But many of us believe that the symbolism of such property is significant.
Do you have thoughts on these issues?
Can you provide other examples of postwar wounds that need redress to allow healing to occur?