What turns an expatriate neighbor to an enemy alien?
That's the question underlying 1939, a novel published in 1948. 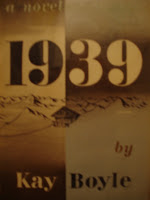 The story centers on a proud Parisian, Madame Corinne Audal. Years ago she'd married protection, in the form of a French military officer. But she's fled the city to live atop a mountain with her lover, Ferdl Eder, an alpine man from Austria. Initially the Savoyard villagers tolerate the couple. But then war arrives. Ferdl's homeland has fallen under Nazi rule. France soon will fall. Her protection ebbs, and his bid to join the Allies goes terribly awry.
The author is Minnesota-born Kay Boyle (1902-1992). Herself an expat 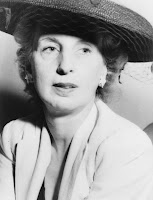 in France throughout the '20s and '30s, the oft-married Boyle (left) wrote often about Europe and the Nazis. Back in the United States during the postwar McCarthy era, she continued her political activism and found herself blacklisted by many magazines, even as her (3d) husband, an Austrian baron, was dismissed from a State Department post.
This is not among Boyle's best-known works. But it's wonderfully written. A sample passage:

So now you'll get out of here where you don't belong, Madame Audal; you'll take your thirty years and your painted mouth and your shameless eye back to where they came from; you, French, or just pretending to be French, but just as much a foreigner as he was because you took up with a foreigner like him; ...

1939's 152 pages provoke considerable thought about national, regional, and ethnic identity, about allegiances, about suspicion and security -- issues as compelling today as they were then.