Read On! The Vagrants

To tell the same story from different viewpoints is not new. The technique won renown in the film Rashômon (1950), and has remained a staple of storytelling ever since.
Yet the way that Yiyun Li (below right) deploys multiple narratives in The Vagrants (2009) is indeed something new.
This novel is the 1st by Li, who was born in Beijing, lived in China 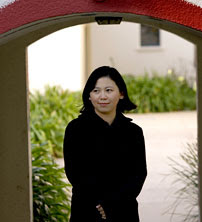 till 1996, and who's now an Assistant Professor of English at the University of California, Davis.
Li's novel revolves around a single event yet reveals a myriad of details about a time, a place, and a people.
The event is the execution of Gu Shan, an enemy of the state who years before had given her all to the Maoist vanguard. The time is 1979, the year Li turned 7; desires for democracy are stirring a decade after the Cultural Revolution. The place is Muddy River, a soulless, purpose-built factory city in a Chinese province far from the capital. The people are those who've come to inhabit this city -- vagrants all regardless of their station.
From among these vagrants, Li chooses her narrators. It is a rich assortment, richly characterized. Tiny Tong's tale of bewilderment is told alongside that of Kai, a broadcaster and mother who's married into the seeming safety of a leading political family, yet chafes at her role. Adolescent Nini's resentment at her very different restraints leads her to the loathsome arms of the amoral Bashi. The old Huas collect rubbish, and

discarded daughters.
Li addresses an array of issues in The Vagrants: disability, poverty, criminal justice and capital punishment, education, familial hierarchy and filial duty. But she does so without polemic, through wonderfully written, intimate portraits of her characters. Each narrator's small story remains in mind even as the reader ponders Li's larger narrative of an empty and arbitrary society, in a state at odds with its people.
A literary jewel.