Report from the XVIIIth International Congress of Comparative Law in Washington

(Delighted to welcome back alumna Afra Afsharipour, who contributes this guest post)

► Judge Rosemary Barkett (right), U.S. Court of Appeals for the Eleventh Circuit (for whom I had the privilege of clerking), began by remarking that to some extent comparing laws has some role in all jurisdictions. She presented a historical perspective from the United States to demonstrate that the practice of considering foreign sources is rooted in the legal history and tradition of the United States, citing to the Declaration of Independence, the U.S. Constitution, and the Federalist papers, as well as to numerous opinions from the U.S. Supreme Court. One of Judge Barkett’s most important points was that, as international and comparative scholars, we need to address the definitional problems in comparative law. For example, many jurisdictions espouse allegiance to the rule of law, but what exactly does rule of law entail?

► Justice Sabino Cassese (left), of the Constitutional Court of Italy, next provided three distinct examples of courts looking beyond their own nation’s borders for insights. He emphasized that recourse to comparison by high courts is widespread, and that increasingly supreme courts are acting as comparatists. Justice Cassese emphasized two tasks for comparative lawyers and scholars: one, to examine and evaluate how judges and courts use foreign law; and two, to develop methods and procedures for comparison.

► The presentations of Judge Barkett and Justice Cassese were followed by the practitioner’s perspective, Carolyn Lamm (right), a partner at White & Case in Washington and President of the American Bar Association. She emphasized the importance of looking to other systems for persuasive, not precedential, value. Lamm reminded us of the speech from former U.S. Chief Justice William H. Rehnquist, in a 1989 talk titled "Constitutional Courts -- Comparative Remarks," in which he remarked:

For nearly a century and a half, courts in the United States exercising the power of judicial review had no precedents to look to save their own, because our courts alone exercised this sort of authority. . . . But now that constitutional law is solidly grounded in so many countries, it is time that the United States courts begin looking to the decisions of other constitutional courts to aid in their own deliberative process.

(Reprinted in Germany and Its Basic Law: Past, Present and Future, A German-American Symposium 411, 412 (Paul Kirchhof & Donald P. Kommers eds., 1993). Lamm also cited to the “Obama-Clinton Doctrine” speech that State Department Legal Adviser Harold Hongju Koh delivered to the American Society of International Law annual meeting. (prior IntLawGrrls post) The speech is definitely worth a read. 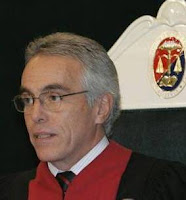 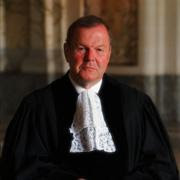 ► Judge Bruno Simma (left) followed by describing his experience on the International Court of Justice and his use of comparative law in an early opinion on the Oil Platforms dispute between Iran and the United States. Judge Simma warned both of the dangers that could befall a comparatist and of comparative law accidents.
The presentations were followed by a dynamic discussion among the panelists on a variety of issues, including the weight to be given to comparative law in judicial opinions and the relationship between international and comparative law.
The opening plenary was followed the rest of the day with various breakout sessions, including the delivery and discussion of general and national reports prepared for the conference. For those of you interested in comparative surveys of various legal issues, the reports should not be missed.
The conference got off to a great start yesterday. Today’s program, which will be held at the George Washington University Law School, promises to be as dynamic as this first day.
by Afra Afsharipour at 2:49 AM