(Delighted to welcome back alumna Siobhán Mullally, who contributes this guest post)

The Dáil (left), the lower house of Parliament in Ireland, has passed legislation giving formal legal recognition to same-sex relationships for the first time.
The Civil Partnership Bill 2010 passed last Thursday evening without a vote, support coming from all (or most) parts of the political spectrum. It now must be considered by the Seanad.
Under the terms of the Bill, marriage-like benefits will be extended to gay and lesbian couples across a range of areas including property, succession, maintenance, pensions. Further legislation is due to extend benefits in the fields of social welfare and tax.
The status of civil partnership will not provide rights and privileges equivalent to marriage, which remains open only to different sex couples. This distinction has remained because it is deemed necessary to safeguard the protection given to marriage in Article 41(3) of the Irish Constitution (right), which states in part:

The State pledges itself to guard with special care the institution of Marriage, on which the Family is founded, and to protect it against attack.

The constitutional text does not, however, make any reference to marriage as being exclusively open to different sex couples. Rather, it is legislative and judicial interpretation of the constitutional text that has presumed this exclusionary stance. Much of the debate on the Civil Partnership bill has touched upon the inequalities that will persist on introduction of this new status, and upon the failure to provide for the rights of children within such partnerships.
Despite these shortcomings, the Civil Partnership Bill has been heralded by many as a mark of progress, a contribution to what Minister for Justice, Mr Dermot Ahern, describes as a ‘modern code,’ that marks a break from a past in which sexual orientation discrimination was commonplace. Included within that modern code are the:
► Employment Equality and Equal Status Acts 2000-2004, which prohibit discrimination on grounds of sexual orientation; and
► Prohibition on Incitement to Hatred Act, 1989, which includes homophobic incitement within its scope.
Introducing the Bill, the Minister for Justice noted that it was now time to add to the legal protections in place against discrimination and exclusion, and to officially recognize and affirm same-sex relationships so as to bring to an end the legacy of prejudice and inequality.
Granting official recognition and affirmation brings with it the question of whether a ‘conscientious exemption’ clause should be granted to those whose religious belief and affiliations do not allow for affirmation or even tolerance of same sex relationships.
A proposed legislative amendment, allowing for such an exemption clause, was dismissed, despite last minute interventions by the Irish Bishops’ conference, who argued that the failure to provide for such a clause was unconstitutional, given the limits imposed on freedom of conscience and on social and civil freedom in religious matters. In response, John Gormley, the Minister for Environment and Green Party representative, criticized the Church’s attempt to exert influence on the legislative process, which he noted was reminiscent of earlier eras of ‘church interference’. The debate on conscience exemption, and its swift dismissal, reflects the changing relationship between Church and State in Ireland, and the waning influence of religion in matters of gender, sexuality and family. 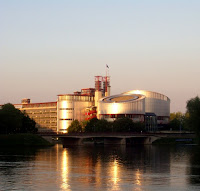 The passing of the Civil Partnership Bill follows on from the judgment that a Chamber of the European Court of Human Rights (left) rendered on June 24th in Schalk and Kopf v Austria.
The applicants had complained that the absence of same-sex marriage in Austria violated their European Convention rights, both under Article 12 (right to marry) and Article 14 (prohibition of discrimination) in conjunction with Article 8 (right to private and family life). They appealed to the Court to interpret the Convention (below right) in light of present-day conditions, and not to restrict the application of Article 12 to different-sex couples. The Court rejected their argument, noting the absence of a European consensus on same-sex marriage. Importantly, however, drawing on Article 9 of the European Union Charter of Fundamental Rights, the Court took the view that the right to marry was not necessarily confined to marriage between different-sex couples. It nonetheless concluded that:
► The question of whether or not to allow same-sex marriage fell to be determined by national law; and
► States continued to enjoy a wide margin of appreciation on this question.
The Court’s judgment left open the question of whether the absence of any form of relationship recognition for same-sex couples might be a violation of the European Convention.
Significantly, the Court’s judgment extends the scope of Article 8. At paragraph 94, it finds for the first time that same-sex couples enjoy not only a right to ‘private life’, but also ‘family life’:

Strong dissenting judgments were entered specifically on the Court’s finding of no violation of Article 14 (non-discrimination), suggesting the possibility of change in the future.
For the moment, the Court’s judgment is unlikely to assist the campaign for marriage equality in Ireland. However, it does challenge existing Irish case-law, including the October 2009 judgment in McD v L, in which the Irish Supreme Court found that ‘de facto’ same-sex couples did not enjoy family life within the meaning of Article 8 of the Convention.
Small steps forward!
by Siobhán Mullaly at 6:20 AM