U.S. Senator Dianne Feinstein (D-Cal.) (right), Chairman of the Select Committee on Intelligence, has voiced her strong support for trying suspected terrorists in federal courts, before civilian judges sitting in courthouses located in the country's 50 states.
Feinstein's op-ed in yesterday's Los Angeles Times adopted an almost mocking tone, concluding its listing of "the flurry of guilty pleas this year by high-profile terror suspects," who "now face maximum terms of life in federal prison -- where there is no possibility of parole," with this:

So much for the claim that our federal courts aren't up to the job.

The op-ed went on to cite statistics demonstrating the efficiency of these courts, which have concluded cases involving more than 400 terrorism suspects in the last 8 years. That's quite in contrast with the military commissions at Guantánamo:

Since 9/11, only four Guantanamo detainees have been prosecuted in military commissions. Two of them received light sentences and are now free.

In the view of Feinstein, who 3 years ago advocated transferring all detainees stateside and trying them before "a regularly-constituted court," the "lopsided statistics" mean that, almost always, civilian federal courts are to be favored.
This new avowal of support for the decades-old American tradition with regard to terror cases is much needed.
Feinstein's op-ed alluded to an absence of current debate. Curious, given the publication of 2 Washington Post op-eds on the issue in the last 5 days. Both advocated positions to the right of Feinstein:

► On the same day Feinstein published in the Times, the man whom she helped to confirm as Attorney General in 2007, Michael B. Mukasey (left) (prior IntLawGrrls posts), came out hard against another proposal to try all GTMO suspects before Article III judges. (He himself once was a life-tenured judge in accordance with Article III of the U.S. Constitution, serving on the U.S. District Court for the Southern District of New York from 1987 to 2006). Mukasey contended that such trials would: not jibe with the constitutional requisite of a jury trial; violate "'the rule of law'" as codified in the Military Commissions Act of 2006; and impose on prosecutors undesirable evidentiary burdens.
Mukasey's op-ed seemed to accept that the GTMO commissions have had "mixed results," attributing this

to military courts' unfamiliarity with the conventions of conspiracy law, which appears to account, for example, for the finding that Osama bin Laden's driver was not substantially blameworthy even though he bore principal responsibility for bin Laden's physical safety and, like those who serve similiar functions for organized crime bosses, had to have been among his most trusted aides.

Not only does this assessment run counter to evidence at the GTMO trial of that driver, Salim Ahmed Hamdan, but it also fails to note that in view of 4 Justices of the U.S. Supreme Court in Hamdan v. Rumsfeld (2006), conspiracy is not a lawful charge. An equal number of Justices disagreed. Justice Anthony M. Kennedy reserved decision, leaving the question wide open as a matter of U.S. law (far less so as a matter of the international law of war, whose tradition does not recognize the charge).
Mukasey concluded by extolling military commissions proceedings at Guantánamo as "remote, secure, and humane," with security "unparalleled anywhere on the mainland," and an "elaborate press gallery." (My own December 2008 observations on same were rather different; see here and p. 9 here.)
► What provoked Mukasey's ire was not a call to close GTMO, but rather a bid to bestow on that Cuba-based naval base its own federal court. 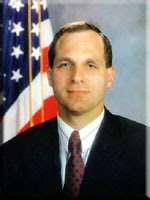 The title of last Friday's Post op-ed said it all: Try Sept. 11 suspects in the U.S. District Court for Guantanamo. Each of its 2 authors is a former judge: Eugene R. Sullivan (near right), Chief Judge of the U.S. Court of Appeals for the Armed Forces, an Article I court (from 1990 to 1995), and Louis J. Freeh (far right), like Mukasey once an Article III judge in Manhattan and, more recently, Director of the Federal Bureau of Investigation (1993-2001).
The authors of this op-ed applauded the Obama Administration decision to seek a federal district court trial for Khalid Sheikh Mohammed and 4 other Guantánamo detainees charged in connection with the attacks of September 11, 2001. But they contended that holding the trials Stateside "is no longer an option for a host of political and practical reasons," adding that the GTMO commissions "are fatally flawed." Hence, their idea: cast a statutory net to include the base within a jurisdictional map of Manhattan, traditional home of S.D.N.Y., just as farflung sites like Wake Island are deemed part of the District of Hawaii. Or create a new D.GTMO. Sullivan and Freeh foresaw "immense benefit" from this hybrid.
The best choice?
None of the above.
► Mukasey simply seeks More Of The Same. More confusion about critical issues like availability vel non of the death penalty, still, as Attorney General Eric Holder recognized, a question mark in any military commission proceeding against KSM et al. More escalation in cost, more inconvenience to counsel, more keeping of the public from full access to the proceedings. More boycotts like that just announced by Omar Khadr. More litigation of every aspect of every proceeding.
Mukasey's mind-boggling idea for yet another newfangled court, "perhaps presided over by Article III judges but with juries drawn from the military," surely would set off even More.
► Sullivan and Freeh would supplant one practical/political challenge with another that has little to commend it.
Put to one side the oddity of Congress sending appeals from GTMO trials to the federal appellate court in New York even though appeals from GTMO habeas now go to its counterpart in Washington. Put aside too that D.GTMO would be no less costly nor inconvenient than the current system. (The authors envisioned "impaneling an anonymous jury in Manhattan and transporting the jurors to Guantanamo Bay for service.")
Consider only the import of such an innovation.
For the 1st time in U.S. history, an Article III court would have its permanent seat in an armed camp. Public oversight would be subject to Defense Department edict -- as, controversially, it is now. Not just jurors but all participants -- even judges -- would effectively be sequestered. The risk is evident that such circumstances would so tip the balance as to preclude fully fair trials. And given the ostensible justification -- stated fears of trying these particular defendants on American soil -- the changes would undermine the authority and legitimacy of all federal courts in the United States.
► Feinstein's op-ed demonstrated that those courts well deserve the authority and legitimacy they have earned over the course of 2 American centuries. Yet it also falls short, for it allows that some detainees yet might be tried before military commissions. Leaving the GTMO courtroom door even a bit ajar creates a foothold for proposals like those in the other op-eds.
Meanwhile, persons captured as many as 8 years ago remain in an offshore site of U.S. military power, uncharged and untried, the crimes attributed to them 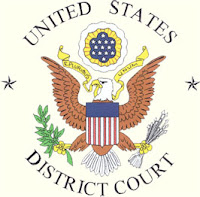 unresolved.
That result is not fair. Not fair to detainees, not fair to victims and their loved ones, not fair to the public at large.
The time is well passed to treat the terrorism suspects of today by the same processes that the likes of Ramzi Yousef, Omar Abdel Rahman, and Manuel Noriega have faced.
It is time to return without exception to American legal tradition.
by Diane Marie Amann at 6:00 AM