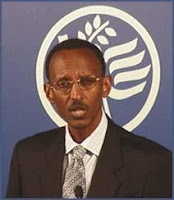 Paul Kagame (left) has been newly re-elected President of Rwanda with 93% of the vote.
Despite that suspiciously high number, government electoral officials reported that the process functioned properly, without irregularities.
It is hard to cry foul -- except that no one else was allowed to compete.
Leading up to the election, all signs pointed to serious political repression. Opposition candidates and supporters were arrested for holding what was deemed an illegal rally. Moreover, the suspension of newspapers, the removal of a human rights researcher from the country, and the restructuring of military leadership all pointed to a regime consolidating power before the election. Some recent incidents of violence -- the attempted killing of an exiled Rwandan general, killing of the vice president of the Democratic Green Party, and the killing of a journalist -- have been attributed to Kagame's government. (Recall too the subject of a recent guest post, the arrest and detention of a U.S. attorney who was helping a would-be Kagame electoral opponent.)
Yesterday, in an interview with National Public Radio, Kagame denied allegations of impropriety. The interview was a troubling window into Kagame's administration, one in which nearly anything can be done with impunity, a lesson that U.N. Human Rights Committee member Ruth Wedgood, in an EJIL Talk! commentary posted on Sunday, has argued was learned as a result of

the West's failure to address Tutsi violations of the laws of war.

Responding in the NPR interview to criticism over the lack of opposition participation in the election, Kagame implied that there had been no opposition at all, or perhaps that the participation of Rwandan citizens in the electoral process did away with the need for organized political opposition. He said:

Well we've had a lot of criticisms indeed, most of which is just very unfair and have no basis. What we've done wouldn't have been successful if there had not been participation of Rwandans.

Kagame also diminished the responsibility of a ruling party to allow for opposition:

Despite Kagame's total denial of the label "undemocratic," democracy notably fails to make the list of Kagame's major goals. The rhetoric that democracy is a luxury only available to the developed world, coded in unassailable terms of anti-imperialism, does not bode well. While Kagame has presided over a transition from horrific conflict to relative stability, it begs the question at what cost.
When asked to respond to other labels sometimes ascribed to him -- such as "authoritarian leader with a vision," or "benevolent dictator" -- Kagame replied ominously:

I think this is said by few, but very loudmouthed, people.

The NPR interview doesn't provide much hope that such dissenters will have a space to voice their opinions, let alone form opposition groups, during the next Kagame term. As Wedgwood wrote, and Opinio Juris blogger Kevin Jon Heller agreed, the United States needs to reevaluate its relationship to Rwanda.
In short, the international community needs to pressure Kagame to move away from a platform of unity and towards one that emphasizes civil liberties.

Great post, Kate, as recognized in Kevin Jon Heller's post today, at http://opiniojuris.org/2010/08/12/kate-gibson-on-erlinders-arrest-in-rwanda/. Kevin also takes due note of the ASIL Insight that Kate Gibson just published, reprising her earlier IntLawGrrls guest post, which you cite in your own post, on the arrest of the U.S. attorney. The Insight is at http://www.asil.org/insights100811.cfm.