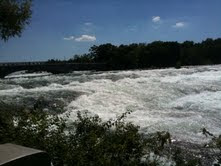 As intlawyers well know, a foundation of contemporary rules regarding the use of force is the Caroline affair.
As posted, U.S.-Britain negotiations more than 170 years ago articulated a concept of "anticipatory self-defense," subject to conditions of necessity and proportionality.
Perhaps less well known is the underlying incident.
Spurring the diplomatic exchange of notes was 1837 unrest in Canada, then a British colony. Anti-British rebels encamped at Navy Island in the middle of the Niagara

River, which marks the U.S.-Canada border. Rebel night-raids of Britain's Canadian forts prompted Britain to seize the Caroline, a rebel vessel. They torched it and set it loose; it broke up in the rock-strewn rapids. Eventually, what was left of the Caroline went over the Niagara Falls.
Hence this post-card: photos of those rapids and falls made on a lovely summer Sunday, en route to the 4th Annual International Humanitarian Law Dialogs at Chautauqua, New York, about which more to come.
by Diane Marie Amann at 11:30 AM