Last week, the Wildlife Conservation Society (WCS) reported that coral reefs off the coast of Indonesia are being devastated by unusually warm sea waters. In what is being called "one of the most rapid and destructive coral bleaching events on record" large swaths of coral off the coast of Sumatra have died.Climate change poses a serious threat to coral reefs. Indeed, the Intergovernmental Panel on Climate Change (IPCC) devoted much of the marine ecosystems chapter of its 2007 Report to coral reefs. The International Union for the Conservation of Nature (IUCN) lists many species of coral on its "red list" of threatened species.

Corals reefs are some of the most diverse ecosystems on earth. They occupy only one percent of the world's ocean surface but provide a home for 25 percent of all sea life - including fish that millions of people rely on for food.
Ordinarily coral reefs are brightly colored because coral lives in a symbiotic relationship with algae. Coral bleaching occurs when environmental stresses like excessive heat cause coral to expel the algae with which they normally coexist. When this occurs, the coral reefs turn a dull and lifeless grey. If the bleaching is severe enough, the coral die from a lack of the energy and oxygen that the algae provide.

Not only does the increased water temperature associated with global warming jeopardize coral survival, so does the increased ocean acidification caused by excess atmospheric carbon dioxide being absorbed by the world’s oceans. Reefs protect the coastlines of many countries, especially islands, from storm surges. Thus, coral reef losses put small island states, already threatened by rising sea levels associated with climate change , in further jeopardy.
Aside from their coast-protecting and biodiversity promoting utility, coral reefs are also breathtakingly beautiful. The loss of that beauty compounds the biological and ecological losses. If the current rate of loss continues, we may lose 70% of the world's coral reefs in the near future. 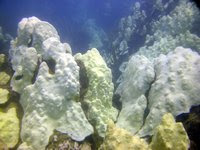 This past May, Indian Ocean water temperatures were significantly warmer than usual (about 7 degrees Fahrenheit above average.) The stress associated with warmer water is killing what had been some of the most biodiverse coral reefs in the world. Indeed, the WCS reports that reefs are up to 80 percent bleached, with more colonies expected to die off in the coming months
The loss of these coral reefs (which incidentally were either unaffected or recovering well from the 2004 Indian Ocean tsunami) is a devastating blow to the region, and the world. Not only is the loss of biodiversity a tragedy in itself, but it comes as a tremendous loss to the regions inhabitants, many of whom are impoverished and dependent on the reef for their food and livelihood.
And, unfortunately, rather than a one-off occurrence, this is a harbinger of things to come. As climate change unfolds, the rate and nature of environmental changes will exceed the ability of coral to adapt. The steady warming and acidification of the world’s oceans will pose a threat to reefs around the world, and to the communities that depend on them. 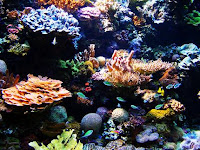 Dr. Caleb McClennen, WCS-Marine Program Director, described the coral die-off as “another unfortunate reminder that international efforts to curb the causes and effects of climate change must be made if these sensitive ecosystems and the vulnerable human communities around the world that depend on them are to adapt and endure.”
by Rebecca Bratspies at 6:16 AM