'The situation is grave.' 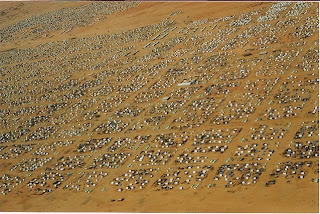 Those few words sum up matters at Kalma (left), whose more than 80,000 inhabitants make it the largest camp for persons displaced by years of conflict in Sudan's westernmost region, locus of the International Criminal Court's stalled Situation in Darfur. (prior posts)
The words were spoken yesterday by a U.N. spokesperson based in Khartoum. He told Agence France-Presse that the government of Sudan had barred all humanitarian aid workers -- whether from the United Nations or a nongovernmental organization -- from entering the Kalma camp or the nearby town of Bilal. For its part, the government denied the charge through a local official, even as it acknowledged that the situation "'remains explosive'" in the wake of:
► last week's internecine killings among rebels; and
►the refusal by the U.N./African Union hybrid peacekeeping operation, UNAMID, to turn over persons it has detained to Sudanese officials.
In short, the words serve to remind that conflict is far from over in Darfur.
by Diane Marie Amann at 2:30 AM