There's a constant in the subtext of stories about Sudan.
For years, criticism of Sudan's treatment of its western and southern regions has come from many corners -- from college campuses, political candidates, human rights groups, aid workers, even states themselves. Not much progress, for all of that: 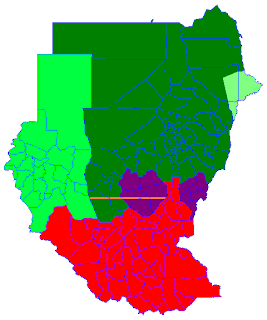 ► The western region, Darfur, remains a humanitarian-aid disaster, as posted just days ago. Moreover, the current suspension of outright civil war in that region (in light green on the map at left) seems to have a rather short fuse.
► The warrant issued in March 2009 by the International Criminal Court, for the arrest of Sudan's President on charges of genocide and other atrocities in Darfur, remains unfulfilled. Indeed, it is flouted not only by its target, Omar al-Bashir, but also by the African Union, the regional organization through which some of Bashir's fellow leaders have promised him cover against the global court.
► Meanwhile, concerns mount that the government will put off a Southern Sudan independence referendum, which a 2005 peace agreement set for January 2011. Yesterday, according to the Associated Press, a local leader predicted "the collapse of a peace accord that ended a war that killed more than 2 million people if it stalls" the election, "which could turn the arid region," in red on the map at left, "into the world's newest nation and split Africa's largest country in two."
That's the text.
Why such disarray?
Why no change given the apparent consensus, at least in the West, that the Darfur conflict needs to come to an end?
Given further apparent consensus that the Southern Sudan peace agreement should be honored?
In short, what's the subtext?
In an article published this week, the Wall Street Journal's Jess Bravin connected dots that may answer some of these questions.
Reporting from Guantánamo Bay, Cuba, on a military 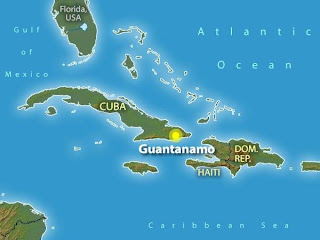 The U.S. has been working with the Sudanese government to repatriate detainees from Guantanamo Bay, according to evidence presented ....

Indications are that upon imposition of sentence, Qosi will be repatriated to Sudan, along with 9 other Sudanese men detained at Gitmo. Adduced, Bravin wrote, was a letter which said:

'Sudan is ready to cooperate with President Obama in his effort to close down the Guantanamo facility ...'

Bravin connected this readiness to cooperate to Bashir's continuing at-large status. Experts he contacted -- Juan E. Méndez and IntLawGrrls' own guest/alumna, Mary Ellen O'Connell, disagreed on whether including Gitmo in the Sudan/ICC mix was a good or bad idea.
Truth is, given the way that countries interact, conflation of the 2 is probably inevitable. So too the add-on of concerns about the on-the-ground situation in Darfur -- even apart from consideration of the ICC charges. So three the add-on of concerns about what's up with Southern Sudan.
There's yet a 4th add-on, implicit but not quite overt in these Guantánamo revelations: Sudan's been a linchpin in counterterrorism at least since the days that the government tolerated Osama bin Laden's presence there, so that the United States and its allies are loathe to dismiss out of hand any aid the Sudanese government gives to anti-Qaeda efforts.
Kudos to Bravin for bringing subtext to light.
Time now for people who care to push the United States -- and other countries with clout, in the Security Council or elsewhere -- squarely to confront the complex of issues related to policy on Sudan.
by Diane Marie Amann at 7:00 AM